Liberalism and Its Critics (Readings in Social & Political Theory #3) (Paperback) 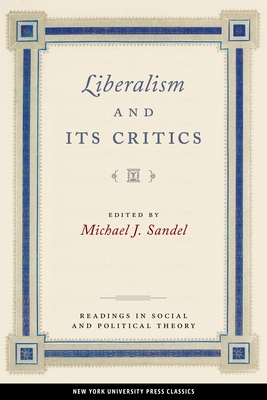 Much contemporary political philosophy has been a debate between utilitarianism on the one hand and Kantian, or rights-based ethics on the other. However, in recent decades liberalism has faced a growing challenge from a different direction, from a view that argues for a deeper understanding of citizenship and community than the liberal ethic allows. The writings collected in this volume present leading statements of rights-based liberalism and of the communitarian, or civic republican alternatives to that position. With contributions from leading theorists such as Isaiah Berlin, John Rawls, Alasdair MacIntyre, Liberalism and Its Critics shifts the focus from the familiar debate between utilitarians and Kantian liberals to consider a more powerful challenge to the rights-based ethic-a challenge indebted to Aristotle, Hegel, and the civic republican tradition.

Michael J. Sandel teaches political philosophy at Harvard University. He is the author of several books, including, Liberalism and the Limits of Justice (1982).