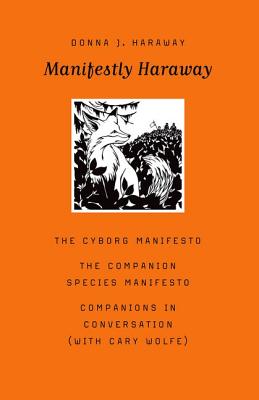 This is book number 37 in the Posthumanities series.

Electrifying, provocative, and controversial when first published thirty years ago, Donna Haraway’s “Cyborg Manifesto” is even more relevant today, when the divisions that she so eloquently challenges—of human and machine but also of gender, class, race, ethnicity, sexuality, and location—are increasingly complex. The subsequent “Companion Species Manifesto,” which further questions the human–nonhuman disjunction, is no less urgently needed in our time of environmental crisis and profound polarization.

Manifestly Haraway brings together these momentous manifestos to expose the continuity and ramifying force of Haraway’s thought, whose significance emerges with engaging immediacy in a sustained conversation between the author and her long-term friend and colleague Cary Wolfe. Reading cyborgs and companion species through and with each other, Haraway and Wolfe join in a wide-ranging exchange on the history and meaning of the manifestos in the context of biopolitics, feminism, Marxism, human–nonhuman relationships, making kin, literary tropes, material semiotics, the negative way of knowing, secular Catholicism, and more.

The conversation ends by revealing the early stages of Haraway’s “Chthulucene Manifesto,” in tension with the teleologies of the doleful Anthropocene and the exterminationist Capitalocene. Deeply dedicated to a diverse and robust earthly flourishing, Manifestly Haraway promises to reignite needed discussion in and out of the academy about biologies, technologies, histories, and still possible futures.

Donna J. Haraway is distinguished professor emerita in the History of Consciousness Department at the University of California, Santa Cruz, where she is also affiliated with the departments of anthropology, feminist studies, environmental studies, and film and digital media. She is an active participant in UCSC’s Science and Justice Research Center and the Center for Cultural Studies.

Cary Wolfe is Bruce and Elizabeth Dunlevie Professor of English at Rice University, where he is also founding director of 3CT (Center for Critical and Cultural Theory). His books Zoontologies: The Question of the Animal, The Other Emerson (with Branka Arsic), and What Is Posthumanism? are published by Minnesota.

"These are crucial manifestos that changed the discourse and clarified our situation in the postmodern in stunning and beautiful ways. That we are animal and machine and human and full of potential is Donna Haraway’s enduring and inspirational message."—Kim Stanley Robinson, author of Aurora and the Mars trilogy

"Here Donna Haraway’s manifestos are marvelously composted in the rich humus of reflection, erudition, and reasons for laughter that makes thinking with other people so generative. The brilliance that sparks between Cary Wolfe and Haraway illuminates everything that is between, around, underneath, and beside two most profound moments in critical thought."—Marilyn Strathern, University of Cambridge

"Donna Haraway’s essays are invitations to scientists, artists, and everyone-who-must-improvise for respectful play with chimeras, hybrids, cyborgs, GMOs, holobionts, mosaics, allies, and fusions. They are invitations to generate new creative relationships for flourishing during and after the Anthropocene. As always, when presented with essays by Haraway, accept the invitation at the risk of becoming a different person."—Scott F. Gilbert, Swarthmore College

"The social relations of science was a whole movement in the 1930s...It did not survive the cold war purges of intellectual life. Science studies has reinvented many of its themes and in many ways improved upon them. Yet perhaps, as Haraway once noted in passing, the “liberal mystification that all started with Thomas Kuhn…” has erased a little too much of its radical past. We are very fortunate that Donna Haraway and her kith reinvented it."—Public Seminar

"Manifestly Haraway is a timely and necessary publication in response to our own political moment if we are to link up with past failures, and explore new affinities for the future."—Arcadia

"Manifestly Haraway is illuminating and engaging. Donna Haraway contextualizes the manifestos and considers how some of these early ideas are developing alongside fresh concepts and influences." —Sociology