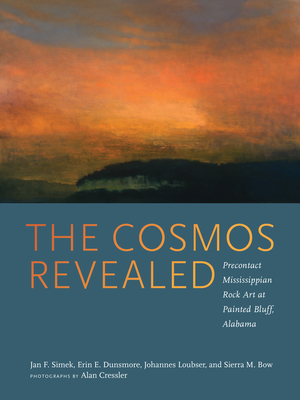 Boasting more than 130 paintings and engravings, Painted Bluff is perhaps the most elaborate prehistoric pictograph site east of the Mississippi River. Positioned at several levels on a dramatic sandstone cliff along the Tennessee River in northern Alabama, the spectacular paintings and engravings depict mythical creatures, dancing humans, and mystical portals. The Cosmos Revealed: Precontact Mississippian Rock Art at Painted Bluff, Alabama is the first complete documentation of one of the most important archaeological sites in eastern North America. Through art, the site materializes a model or “cosmogram” of the Mississippian Native American view of the universe, offering connections between the visible and invisible worlds for Native spiritual leaders and other visitors.

Discovered by Euro-Americans in the early 1800s, the site became known as “Painted Bluff” because of its pictographs, but inexplicably it has only recently been subjected to the intensive archaeological study it deserves. Under the auspices of the Tennessee Valley Authority (TVA), the authors of this volume have documented and assessed the site since 2005, and efforts have been made to reverse some of the vandalism that has occurred over many decades and to stabilize natural degradation of the cliff and its artwork.

Including more than one hundred remarkable prehistoric paintings on the cliff face that have been recorded, mapped, and photographed, this book synthesizes the research done on Painted Bluff to date and documents the entire site. Richly illustrated chapters cover the historical background, geology and archaeology, documentation methods, types of rock art, stratigraphy, paint recipes, TVA management, graffiti removal, and a summary that broadly synthesizes the meaning, timeframe, artistry, organization, conceptual boundaries, and the cosmos revealed. This groundbreaking study features 113 color photographs and a complete catalog of the pictographs and petroglyphs at the site.

Erin E. Dunsmore is senior archaeological specialist with the Tennessee Valley Authority in Knoxville. She is involved with site management and protection and is a rock art expert at the agency. She is coeditor of TVA Archaeology: Seventy-Five Years of Prehistoric Site Research.

Johannes Loubser is an archaeologist and rock art specialist at Stratum Unlimited, Alpharetta, Georgia. He was trained in rock art analysis in South Africa, where he has done a substantial amount of basic research. He is expert in the assessment and conservation of damaged rock art sites.

Sierra M. Bow is a PhD student in anthropology at the University of Tennessee, Knoxville. She studies the chemistry and technology of precontact paints in the Southeast.

Alan Cressler is a hydrologic technician at the US Geological Survey and a renowned photographer specializing in natural history and prehistory as well as a cave explorer who has visited more than 5,000 caves worldwide. He has been the principal photographer for the University of Tennessee Cave Archaeology Research Team for two decades.

“The Cosmos Revealed sets a new standard for what a contemporary monograph on a rock art site should be: we have a detailed historical account, excellent description, the latest in pigment analyses, native voices, rich ethnographic contexts, credible interpretive insights, substantive consideration of preservation and conservation issues and actions, and a wealth of detail in an accessible written format that just invites a vision of not just the imagery but the makers and their worlds. Bravo to a superb collaborative effort put together in an admirable publication!”
—Margaret W. Conkey, coeditor of Engendering Archaeology: Women and Prehistory

“The Cosmos Revealed is a richly detailed account of a state-of-the-art multi-faceted research project. The results are impressive, as is this report, which provides a readable and thought-provoking account of the project. It is a very important contribution to rock art research.”
—American Archaeology

“Provides extremely thorough, state-of-the-art research on a well-known and very important site by providing a detailed empirical account, combined with a well-supported and logical symbolic interpretation.”
—David S. Whitely, author of Cave Paintings and the Human Spirit: The Origin of Creativity and Belief

“The Cosmos Revealed is a landmark synthesis of one of the Native South’s most unusual and intriguing archaeological sites. The authors provide a richly detailed account of this rock art complex, including its history, preservation, and meaning.”
—Thomas J. Pluckhahn, author of Kolomoki: Settlement, Ceremony, and Status in the Deep South, A.D. 350 to 750