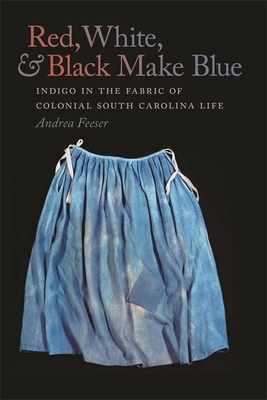 Like cotton, indigo has defied its humble origins. Left alone it might have been a regional plant with minimal reach, a localized way of dyeing textiles, paper, and other goods with a bit of blue. But when blue became the most popular color for the textiles that Britain turned out in large quantities in the eighteenth century, the South Carolina indigo that colored most of this cloth became a major component in transatlantic commodity chains. In Red, White, and Black Make Blue, Andrea Feeser tells the stories of all the peoples who made indigo a key part of the colonial South Carolina experience as she explores indigo's relationships to land use, slave labor, textile production and use, sartorial expression, and fortune building.

In the eighteenth century, indigo played a central role in the development of South Carolina. The popularity of the color blue among the upper and lower classes ensured a high demand for indigo, and the climate in the region proved sound for its cultivation. Cheap labor by slaves--both black and Native American--made commoditization of indigo possible. And due to land grabs by colonists from the enslaved or expelled indigenous peoples, the expansion into the backcountry made plenty of land available on which to cultivate the crop. Feeser recounts specific histories--uncovered for the first time during her research--of how the Native Americans and African slaves made the success of indigo in South Carolina possible. She also emphasizes the material culture around particular objects, including maps, prints, paintings, and clothing. Red, White, and Black Make Blue is a fraught and compelling history of both exploitation and empowerment, revealing the legacy of a modest plant with an outsized impact.

ANDREA FEESER is an associate professor of art and architectural history at Clemson University. She is the author of Waikiki: A History of Forgetting & Remembering.