Pirates You Don't Know, and Other Adventures in the Examined Life: Collected Essays (Paperback) 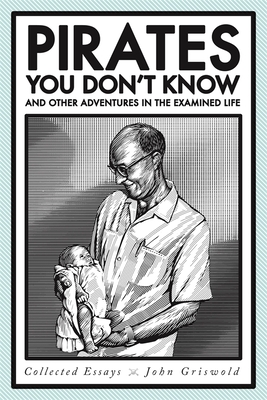 For nearly ten years John Griswold has been publishing his essays in Inside Higher Ed, McSweeney's Internet Tendency, Brevity, Ninth Letter, and Adjunct Advocate, many under the pen name Oronte Churm. Churm's topics have ranged widely, exploring themes such as the writing life and the utility of creative-writing classes, race issues in a university town, and the beautiful, protective crocodiles that lie patiently waiting in the minds of fathers.

Though Griswold recently entered the tenure stream, much of his experience, at a Big Ten university, has been as an adjunct lecturer--that tenuous and uncertain position so many now occupy in higher education. In Pirates You Don't Know, Griswold writes poignantly and hilariously about the contingent nature of this life, tying it to his birth in the last American enclave in Saigon during the Vietnam War, his upbringing in a coal town in southern Illinois, and his experience as an army deep-sea diver and frogman. He investigates class in America through four generations of his family and portrays the continuing joys and challenges of fatherhood while making a living, becoming literate, and staying open to the world. But Griswold's central concerns apply to everyone: What does it mean to be educated? What does it mean to think, feel, create, and be whole? What is the point of this particular journey? Pirates You Don't Know is Griswold's vital attempt at making sense of his life as a writer and now professor. The answers for him are both comic and profound: "Picture Long John Silver at the end of the movie, his dory filled with stolen gold, rowing and sinking; rowing, sinking, and gloating."

JOHN GRISWOLD is a staff writer at the Common Reader, a publication of Washington University. He is the author of A Democracy of Ghosts; Herrin: The Brief History of an Infamous American City and has written extensively (as Oronte Churm) at Inside Higher Ed and McSweeney's Internet Tendency. He lives in Lake Charles, Louisiana.