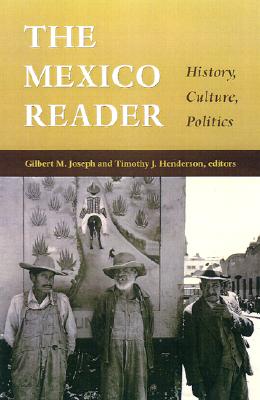 The Mexico Reader is a vivid introduction to muchos M xicos-the many Mexicos, or the many varied histories and cultures that comprise contemporary Mexico. Unparalleled in scope and written for the traveler, student, and expert alike, the collection offers a comprehensive guide to the history and culture of Mexico-including its difficult, uneven modernization; the ways the country has been profoundly shaped not only by Mexicans but also by those outside its borders; and the extraordinary economic, political, and ideological power of the Roman Catholic Church. The book looks at what underlies the chronic instability, violence, and economic turmoil that have characterized periods of Mexico's history while it also celebrates the country's rich cultural heritage.

A diverse collection of more than eighty selections, The Mexico Reader brings together poetry, folklore, fiction, polemics, photoessays, songs, political cartoons, memoirs, satire, and scholarly writing. Many pieces are by Mexicans, and a substantial number appear for the first time in English. Works by Octavio Paz and Carlos Fuentes are included along with pieces about such well-known figures as the larger-than-life revolutionary leaders Pancho Villa and Emiliano Zapata; there is also a comminiqu from a more recent rebel, Subcomandante Marcos. At the same time, the book highlights the perspectives of many others-indigenous peoples, women, politicians, patriots, artists, soldiers, rebels, priests, workers, peasants, foreign diplomats, and travelers.

The Mexico Reader explores what it means to be Mexican, tracing the history of Mexico from pre-Columbian times through the country's epic revolution (1910-17) to the present day. The materials relating to the latter half of the twentieth century focus on the contradictions and costs of postrevolutionary modernization, the rise of civil society, and the dynamic cross-cultural zone marked by the two thousand-mile Mexico-U.S. border. The editors have divided the book into several sections organized roughly in chronological order and have provided brief historical contexts for each section. They have also furnished a lengthy list of resources about Mexico, including websites and suggestions for further reading.

Gilbert M. Joseph is Farnam Professor of History and Director of Latin American and Iberian Studies at Yale University. He is coeditor of Everyday Forms of State Formation: Revolution and the Negotiation of Rule in Modern Mexico and Close Encounters of Empire: Writing the Cultural History of U.S.-Latin American Relations (both published by Duke University Press). Timothy J. Henderson is Associate Professor of History at Auburn University Montgomery. He is the author of The Worm in the Wheat: Rosalie Evans and Agrarian Struggle in the Puebla-Tlaxcala Valley of Mexico, 1908-1927 (also published by Duke University Press).