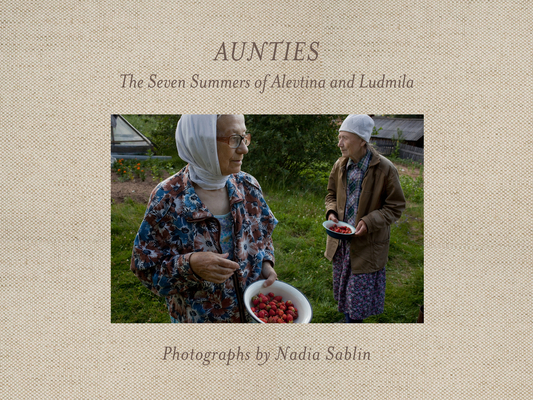 In northwest Russia, in a small village called Alekhovshchina, Nadia Sablin's aunts spend the warmer months together in the family home and live as the family has always lived--chopping wood to heat the house, bringing water from the well, planting potatoes, and making their own clothes. Sablin's lyrical and evocative photographs, taken over seven summers, capture the small details and daily rituals of her aunts' surprisingly colorful and dreamlike days, taking us not only to another country but to another time. Alevtina and Ludmila, now in their seventies, seem both old and young, as if time itself was as seamless and cyclical as their routines--working on puzzles, sewing curtains, tatting lace, picking berries, repairing fences--and as full of the same subtle mysteries. Sablin collaborated with her aunts to recreate scenes she remembered from her childhood and to make new images of the patterns of their days. In these photographs, Sablin combines observation and invention, biography and autobiography, to tell the stories of her aunts' life together, and in the process, quilts together a thoughtful meditation on memory, aging, and belonging.

Nadia Sablin, a freelance photographer based in Brooklyn, New York, earned a B.F.A. from the Rochester Institute of Technology in 2002 and an M.F.A. from Arizona State University in 2011. Her work has been featured in such publications as the New York Times, the Guardian, the Moscow Times, Slate, American Photo, the Calvert Journal, and WPO's The Magazine. Sablin, who has received the Firecracker Photographic Grant, a New York Foundation for the Arts fellowship, a Puffin Foundation Grant, was named one of the Magenta Foundation's Emerging Photographers in 2011, and was Sean O'Hagan's Juror's Pick for the Daylight Photo Awards in 2013. Sablin's photographs have been seen in solo and group exhibitions across the United States, including the Philadelphia Museum of Art, the Philadelphia Photo Arts Center, the Southeast Museum of Photography, the Cleveland Museum of Art, Bellevue College in Washington, and Texas Women's University School of Art. Sablin's photographs of her Russian aunts were chosen from 200 entries to win the seventh biennial CDS/Honickman First Book Prize in Photography. Sandra S. Phillips is the senior curator of photography at the San Francisco Museum of Modern Art. Among the most recent exhibitions that she has curated for SFMOMA are South Africa in Apartheid and After: David Goldblatt, Ernest Cole, Billy Monk; Rineke Dijkstra: A Retrospective; and Exposed: Voyeurism, Surveillance, and the Camera Since 1870. Over her career, she has curated major exhibitions, including Crossing the Frontier: Photographs of the Developing West; William Klein New York 1954-1955; Police Pictures: The Photograph as Evidence; Diane Arbus: Revelations; Larry Sultan: The Valley; and Robert Adams: Turning Back. Phillips has authored or coauthored numerous catalogues, and her articles and essays have appeared in such journals as Art in America, DoubleTake, and History of Photography.