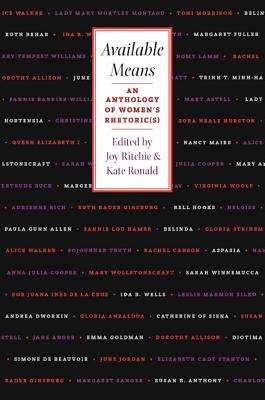 By Joy Ritchie (Editor), Kate Ronald (Editor)
$34.95
It's complicated, and may be unavailable. Place an order and we will contact you with the expected arrival date.

“I say that even later someone will remember us.”—Sappho, Fragment 147, sixth century, BC

Sappho’s prediction came true; fragments of work by the earliest woman writer in Western literate history have in fact survived into the twenty-first century. But not without peril. Sappho’s writing remains only in fragments, partly due to the passage of time, but mostly as a result of systematic efforts to silence women’s voices. Sappho’s hopeful boast captures the mission of this anthology: to gather together women engaged in the art of persuasion—across differences of race, class, sexual orientation, historical and physical locations—in order to remember that the rhetorical tradition indeed includes them.

Available Means offers seventy women rhetoricians—from ancient Greece to the twenty-first century—a room of their own for the first time. Editors Joy Ritchie and Kate Ronald do so in the feminist tradition of recovering a previously unarticulated canon of women’s rhetoric. Women whose voices are central to such scholarship are included here, such as Aspasia (a contemporary of Plato’s), Margery Kempe,  Margaret Fuller, and Ida B. Wells. Added are influential works on what it means to write as a woman—by Virginia Woolf, Adrienne Rich, Nancy Mairs, Alice Walker, and Hélène Cixous. Public “manifestos” on the rights of women by Hortensia, Mary Astell, Maria Stewart, Sarah and Angelina Grimké, Anna Julia Cooper, Margaret Sanger, and Audre Lorde also join the discourse.

But Available Means searches for rhetorical tradition in less obvious places, too. Letters, journals, speeches, newspaper columns, diaries, meditations, and a fable (Rachel Carson’s introduction to Silent Spring) also find places in this room. Such unconventional documents challenge traditional notions of invention, arrangement, style, and delivery, and blur the boundaries between public and private discourse. Included, too, are writers whose voices have not been heard in any tradition. Ritchie and Ronald seek to “unsettle” as they expand the women’s rhetorical canon.

Arranged chronologically, Available Means is designed as a classroom text that will allow students to hear women speaking to each other across centuries, and to see how women have added new places from which arguments can be made. Each selection is accompanied by an extensive headnote, which sets the reading in context. The breadth of material will allow students to ask such questions as “How might we define women’s rhetoric?  How have women used and subverted traditional rhetoric?”

A topical index at the end of the book provides teachers a guide through the rhetorical riches. Available Means will be an invaluable text for rhetoric courses of all levels, as well as for women’s studies courses.

Joy Ritchie teaches undergraduate and graduate courses in writing, rhetoric, and women’s studies at the University of Nebraska-Lincoln. She was coordinator of composition from 1995-2000 and is currently director of Women’s Studies. Her most recent book, co-authored with David E. Wilson, is Teacher Narratives as Critical Inquiry: Rewriting the Script.

Kate Ronald taught at the University of Nebraska-Lincoln from 1984-96, where she coordinated the composition program with Joy Ritchie. She is currently the Roger and Joyce L. Howe Professor at Miami University in Oxford, Ohio, where she teaches graduate and undergraduate courses in rhetoric and writing, and works with the School of Business Administration to improve the teaching of writing. Her most recent project is Reason to Believe: Romanticism, Pragmatism, and the Teaching of Writing, co-authored with Hephzibah Roskelly.

“In Available Means Ritchie and Ronald select women’s voices from Aspasia across the generations and situate them on a rhetorical landscape, thus documenting ways in which women rhetors have used language both artfully and with social and political consequence. This collection contributes greatly to our ongoing efforts to reconceptualize the history of rhetoric in more inclusive terms and to generate analytical and interpretive frames that permit a deeper and different understanding of rhetorical practices. Students, teachers, researchers, and scholars are certain to benefit from this remarkable resource.”

“This volume adds greatly to rhetorical thought and history . . . Most importantly, though, is not only that these essays present an important contribution to thetorical tradition but it expands the canon by representing essays not previously over-anthologized.”