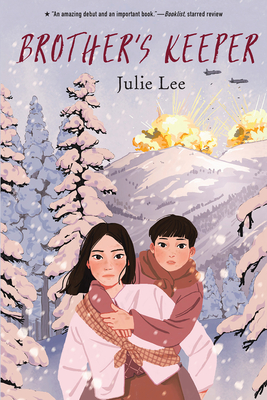 With war looming on the horizon and winter setting in, can two children escape North Korea on their own?

Winner of the Freeman Book Award!

Twelve-year-old Sora and her family live under an iron set of rules: No travel without a permit. No criticism of the government. No absences from Communist meetings. Wear red. Hang pictures of the Great Leader. Don't trust your neighbors. Don't speak your mind. You are being watched.

But war is coming, war between North and South Korea, between the Soviets and the Americans. War causes chaos--and war is the perfect time to escape. The plan is simple: Sora and her family will walk hundreds of miles to the South Korean city of Busan from their tiny mountain village. They just need to avoid napalm, frostbite, border guards, and enemy soldiers.

But they can't. And when an incendiary bombing changes everything, Sora and her little brother Young will have to get to Busan on their own. Can a twelve-year-old girl and her eight-year-old brother survive three hundred miles of warzone in winter?

Haunting, timely, and beautiful, this harrowing novel from a searing new talent offers readers a glimpse into a vanished time and a closed nation.


"Will ultimately be recognized as one of the best books... on the Korean War."—Education About Asia, the Association for Asian Studies

Julie Lee, a marketer-turned-writer, lives in an Atlanta suburb with her three children and her husband. A first-generation American, her mother escaped North Korea during the Korean War and later immigrated to the United States. Her debut, Brother's Keeper, which was based on her mother's experiences, received the Freeman Book Award and was named a Jane Addams Children's Book Award Finalist. Julie studied history at Cornell before working in advertising in Manhattan, eventually relocating to the South.

"In its portrayal of hardship and survival, Brother's Keeper joins a rich tradition of stories about children on wartime journeys."—The Wall Street Journal

★ "An amazing debut and an important book."—Booklist, Starred Review

★ "Debut author Lee paints this gripping and emotional midwinter escape with the eye of a wartime journalist and the determined heart of a young girl."—Kirkus Reviews, Starred Review

★ "A harrowing, heartbreaking tale of hope, love, and survival against insurmountable odds. . . . With an artful and expressive narrative voice, and inspiration drawn from her mother's experiences in Korea as a young woman, debut novelist Lee enthralls and enlightens." —School Library Journal, Starred Review

★ "A moving, suspenseful refugee story . . . the book is at heart a poignant exploration of a girl's struggle against traditional female roles and her determination to succeed on her own terms."—Publishers Weekly, Starred Review

"The narrative makes a painful reality of the deprivation that people faced when fleeing their homes . . . At its heart, Brother's Keeper is about families and how they overcome hardship and loss. The Korean War and Korean culture act as a powerful setting for this work, and the strength and sorrow of Sora and Youngsoo are haunting." —Foreword Reviews

"The martial and political conflict in 1950 Korea is catalyst and backdrop, and the story of the Pak children's treacherous flight is compelling. The underlying domestic struggle between Sora and her parents carries equal weight, though."—The Bulletin of the Center for Children's Books

"Will ultimately be recognized as one of the best books for middle and high school students on the Korean War, and a captivating and inspiring read for people of all ages."—Education About Asia, the Association for Asian Studies

"Unbelievably powerful, this hauntingly beautiful story was so intense that, at times, it had me afraid to turn the pages. I never knew what to expect around the corner."—Jane Addams Children's Book Award Honoree Linda Williams Jackson, author of Midnight Without a Moon