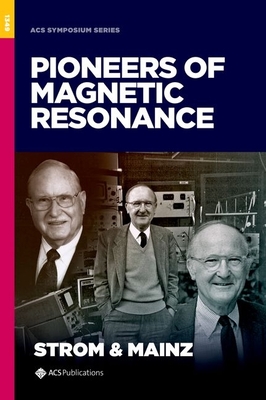 Nuclear magnetic resonance and electron paramagnetic resonance have become some of the most powerful tools of modern analytical chemistry. From its origins in the 1940s to recent cutting edge advancements, the history of magnetic resonance is tied to the lives of the many scientists who helped
explore its fundamental principles and practical applications. Pioneers of Magnetic Resonance is a collection of these stories, starting with the scientists who first discovered the phenomena, detailing magnetic resonance's initial use in chemistry, and how it became such a ubiquitous technique. The
authors' personal recollections of the giants in the field give unique insight into the connection between people and their impact on the scientific community.

E. Thomas Strom is Adjunct Professor at the University of Texas at Arlington (UTA), where he teaches organic and polymer chemistry. He came to UTA after retiring from Mobil in Dallas, where he worked for 32 years as a research chemist studying oil field chemistry. He is the holder of 25 US patentsin the areas of oil production and uranium solution mining. He was Chair of the ACS Division of the History of Chemistry in 2011-2012. His research interests are in the history of chemistry and the study of anion radicals by electron spin resonance. He was one of the initial ACS Fellows and is apast winner of the Dallas-Fort Worth ACS Section's Doherty Award. He received his B.S. Chem degree from the University of Iowa, his M.S. Chem degree in nuclear chemistry from UC Berkeley, and his Ph.D. in physical organic chemistry from Iowa State University working under mentor Glen A. Russell. Hehas coedited five volumes in the ACS Symposium Series. Vera V. Mainz is a former director of the NMR Lab in the School of Chemical Sciences at the University of Illinois at Urbana-Champaign. She received a B.S. in Chemistry and Mathematics at Kansas Newman College (1976), a Ph.D. in Inorganic Chemistry at the University of California Berkeley (1981, with R. A. Andersen), spent 1-1/2 years working at Rohm and Haas in Springhouse, PA, and had a postdoctoral position at the University of Illinois at Urbana-Champaign (1983-1985) before becoming Director of the NMR Lab (1985-2010). She was elected to the position of Secretary-Treasurer of theHistory of Chemistry Division (HIST) of the ACS in 1995 and has served as Secretary-Treasurer since then. Her interest in the HIST Division was kindled when she presented her work on the chemical genealogy of the University of Illinois (UI) Chemistry Department at a HIST symposium on chemicalgenealogies in 1994. She has continued her work in this area and plans to update this project when her schedule allows. Mainz's interest in the history of chemistry led her to curate two exhibits at UI' Rare Book Room with husband Gregory Girolami: From Alchemy to Chemistry: Five Hundred Years ofRare and Interesting Books and Crystallography: Defining the Shape of Our Modern World.