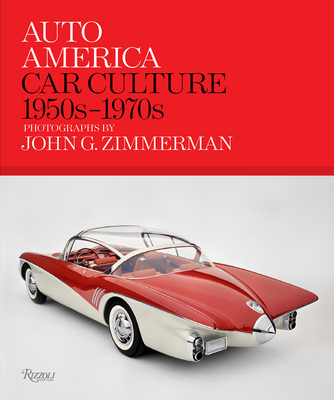 A glorious and nostalgic celebration of a defining period in American car culture—the 1950s to the 1970s, the golden age of Detroit’s icons of the road—when automobile design was at its peak and the car itself was synonymous with a vision of success in America.

Auto America offers a compelling look at three decades (the 1950s, ’60s, and ’70s) of America’s fascination with the automobile. At a time when self-driving vehicles and climate change are transforming driving around the world, John G. Zimmerman’s pictures capture the optimism and even utopianism of a beloved period in American car culture.

Many of Zimmerman’s photographs were originally taken for Life, Time, and Sports Illustrated magazines and highlight diverse aspects of America’s auto industry at its zenith; they feature not only iconic cars of the era, which Zimmerman chronicled comprehensively at car shows and in studio assignments throughout the period, but also a behind-the-scenes look at the people who designed, built, collected, exhibited, and raced them.

With more than 200 photographs and drawing on the John G. Zimmerman Archive’s collection—including his best-known photographs of Fords, Chryslers, and GMs in their heyday alongside ephemera, tear sheets, and outtakes from his assignments—the book celebrates the automobile’s central place in American culture during those decades when the timeless silhouettes of classic cars ruled the roads.

John G. Zimmerman (1927–2002) has been recently rediscovered as a unique chronicler of twentieth-century American culture. His photographs appeared frequently in Sports Illustrated, Life, and other major newspapers and magazines from the 1950s through the 1980s, and his work has been published in books including America in Black and White and Crossing the Line: Arthur Ashe at the 1968 US Open. Linda, Greg, and Darryl Zimmerman are the children of John G. Zimmerman and the curators of the photographer’s archive. Terry McDonell is a writer and editor, and the former Editor of the Time Inc. Sports Group.

"With an introduction by Terry McDonell, former editor of the Time, Inc. Sports Group, this lavish coffee table book will delight automotive aficionados at every turn of the page." —CARMEL MAGAZINE