United Tastes of Texas: Authentic Recipes from All Corners of the Lone Star State (Hardcover) 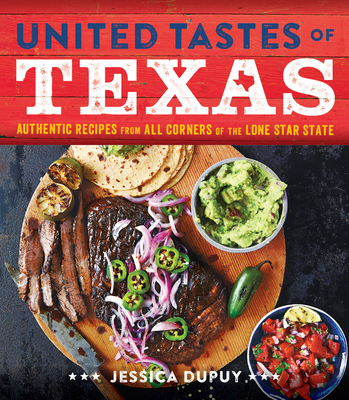 There are many things that are big in Texas: Wide open spaces, personalities, hair, but above all, there's flavor! United Tastes of Texas is your geographical guide to Texas cuisine based on five distinct culinary regions: Central, Coastal, East, South, and West Texas; as well as the culinary influences brought by settlers from countries including Czechoslovakia, Germany, Mexico, and Spain.

Each chapter starts with a brief history of the region, as well as plenty of interesting facts and bits of history including notes on cooking equipment, stories on local chefs and restaurants that have helped shape each of the regions, and pages of beautiful photography and imagery. But foremost is the food: 125 recipes featuring traditional and regional-specific dishes and cooking methods including Texan takes on Black-Eyed Peas, Skillet Cornbread, Shrimp Creole, Smoked Brisket, Smoked Tortilla Soup, and one of the most classically Texan dishes - Chicken Fried Steak, just to name a few.

Whether you're a native Texan in need of recipe inspiration, a Texas ex-pat longing for a taste of home, or a culinary adventurer ready to explore the Lone Star State, United Tastes of Texas packs plenty of history, travel, and food into one book!

Jessica Dupuy is a fourth-generation Texan and a freelance writer with bylines in Texas Monthly, Texas Highways, Fodor's Travel, National Geographic Traveler, Imbibe, The Hollywood Reporter, and numerous Austin publications. She also was co-writer on Uchi: The Cookbook, in conjunction with James Beard Award winning Chef Tyson Cole and The Salt Lick Cookbook: A Story of Land, Family and Love on the iconic Texas barbecue restaurant. Her most recent cookbook collaboration was with Texas chef Jack Gilmore on Jack Allen's Kitchen: Celebrating the Tastes of Texas. She is a Certified Sommelier & Certified Specialist of Wine, member of Les Dames D'Escoffier of Austin, is on the advisory board for the Wine and Food Foundation of Texas, and is a lifelong Texan. Dupuy lives in Austin with her husband, her two Duck Tolling retrievers, her son Gus, and daughter Ashlyn.