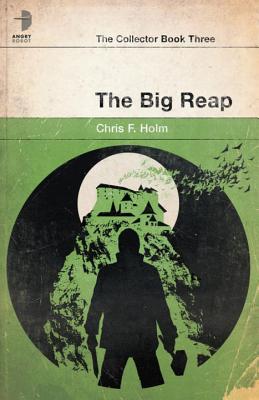 The Collector Book Three
Who Collects the Collectors?
Sam Thornton has had many run-ins with his celestial masters, but he's always been sure of his own actions. However, when he's tasked with dispatching the mythical Brethren a group of former Collectors who have cast off their ties to Hell is he still working on the side of right?
File Under: Urban Fantasy Soul Solution - Secret Origins - Flaming Torches - Double Dealing ]

Chris Holm was born in Syracuse, New York, the grandson of a cop with a penchant for crime fiction. It was the year of punk rock and Star Wars, two influences that to this day hold more sway over him than perhaps his wife would like.

His stories have appeared in a slew of publications, including Ellery Queen's Mystery Magazine, Alfred Hitchcock's Mystery Magazine, Beat to a Pulp, and Thuglit. He has been an Anthony Award nominee, a Derringer Award finalist, and a Spinetingler Award winner.

He lives on the coast of Maine with his wife and a noisy, noisy cat. When he's not writing, you can find him on his porch, annoying the neighbours with his guitar. The author lives in Maine.

"A war is brewing between angels and demons in this twisty, fast-paced, and thoroughly enjoyable urban fantasy debut... Sam is a likable antihero, pleasantly human despite being unquestionably damned, and the politics of Heaven and Hell provide plenty of material for sequels." - Publishers Weekly