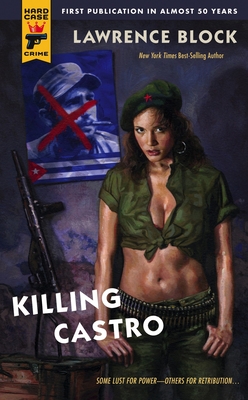 This is book number 51 in the Hard Case Crime Novels series.

BECAUSE IN 1961, NO ONE WOULD HAVE CALLED FIDEL CASTRO THE RETIRING TYPE.

There were five of them, each prepared to kill, each with his own reasons for accepting what might well be a suicide mission. The pay? $20,000 apiece. The mission? Find a way into Cuba and kill Castro.

This breathtaking thriller, originally published the year before the Cuban Missile Crisis under a pen name Lawrence Block never used before or since, is the rarest of Block’s books – and still a work of chilling relevance all these years later, with Castro and Cuba once again commanding headlines.

Lawrence Block has won more awards than almost any other living mystery writer. He was named a Grand Master by the Mystery Writers of America.  His work ranges from the searing noir investigations of alcoholic detective Matt Scudder to the witty adventures of master burglar Bernie Rhodenbarr and includes many stunning stand-alone thrillers.

"There is only one writer of mystery and detective fiction who comes close to replacing
the irreplaceable John D. MacDonald...The writer is Lawrence Block." - Stephen King

"One of the very best writers now working the beat." - The Wall Street Journal

"Lawrence Block is a master of crime fiction." - Jonathan Kellerman