The Comedy is Finished (Hardcover) 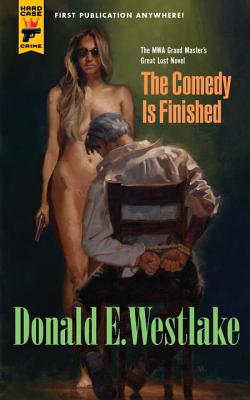 By Donald E. Westlake
$25.99
Backordered. Place an order and we will let you know when to expect your book.

The year is 1977, and America is finally getting over the nightmares of Watergate and Vietnam and the national hangover that was the 1960s. But not everyone is ready to let it go.

Not aging comedian Koo Davis, friend to generals and presidents and veteran of countless USO tours to buck up American troops in the field. And not the five remaining members of the self-proclaimed People's Revolutionary Army, who've decided that kidnapping Koo Davis would be the perfect way to bring their cause back to life...

The final, previously unpublished novel from the legendary Donald Westlake!

Donald E. Westlake was the award-winning author of more than 100 books and screenplays, including the Academy Award-nominated screenplay for The Grifters.  Named a Grand Master by the Mystery Writers of America (the organization's highest honor), Westlake also received the prestigious Edgar Allan Poe Award three times.

Under his famous pen name "Richard Stark," Westlake wrote the Parker crime novels that inspired the movies Point Blank and Payback, as well as the acclaimed graphic novel series by artist Darwyn Cooke.

"The characters are well drawn, the dialog flows, and the chapters speed by, making for a breezy, solid read. This late discovery is a welcomed treat for Westlake’s many fans. A natural for all mystery collections." - Library Journal

“One of the best Westlake novels I’ve read.” - Washington Post

“A terrifying sprint for redemption and rescue with the reader kept in agonizing suspense until the literal last page. Not to be missed.” - Mystery Scene

“A tense, compelling story...painfully insightful...[readers will] be hard-pressed to put the book down.” - Booklist

“Halfway into January and we already have the first great book of 2012…some of the finest work of the author’s career. And that is truly saying something.” - Vince Keenan

“We’re all in the presence of the master one last time.” - Open Letters Review

“…a master at the top of his game.” - Slacker Heroes

“Westlake is a master of ratcheting up the tension…the book is highly recommended.” - Bill Crider

“A masterful little gem.” - In Reference to Murder