Justice and Beauty in Muslim Marriage: Towards Egalitarian Ethics and Laws (Paperback) 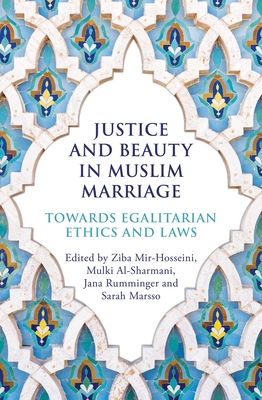 Many contemporary Muslim family laws rest on patriarchal concepts. The time for change is now.

The model of marriage constructed in classical Islamic jurisprudence rests on patriarchal ethics that privilege men. This worldview persists in gender norms and family laws in many Muslim contexts, despite reforms introduced over the past few decades.

In this volume, a diverse group of scholars explore how egalitarian marital relations can be supported from within Islamic tradition. Brought together by the Musawah movement for equality and justice in the Muslim family, they examine ethics and laws related to marriage and gender relations from the perspective of the Qur’an, Sunna, Muslim legal tradition, historical practices and contemporary law reform processes. Collectively they conceptualize how Muslim marriages can be grounded in equality, mutual well-being and the core Qur’anic principles of ‘adl (justice) and ihsan (goodness and beauty).

Ziba Mir-Hosseini is Professorial Research Associate at the Centre for Middle Eastern and Islamic Law, SOAS, University of London. A legal anthropologist, specialising in Islamic law, gender and development, she is a founding member of Musawah Global Movement for Equality and Justice in the Muslim Family. Her previous publications include Islam and Gender: The Religious Debate in Contemporary Islam and Men in Charge? Rethinking Authority in Muslim Legal Tradition.

Mulki Al-Sharmani is Academy of Finland research fellow and lecturer, Faculty of Theology, University of Helsinki, and research coordinator of the Musawah knowledge-building initiative to rethink the notion of male authority in Muslim family laws. Her research interests include Muslim family laws, Islamic feminism, gender, migration and transnationalism. She is the editor of Feminist Activism: Women’s Rights and Legal Reform (ZED Books, forthcoming 2014), and her Egyptian Muslim Family Laws: Legal Reforms and Gender Justice is under consideration for publication.

Jana Rumminger currently lives in Singapore and works with Musawah, the global movement for equality and justice in the Muslim family. Her focus is on issues related to reform of Muslim family laws and implementation of the UN Convention on the Elimination of All Forms of Discrimination against Women (CEDAW). After graduating from Northeastern University School of Law, Jana spent a year as a Luce Scholar in Kuala Lumpur, Malaysia, where she worked on advocacy and law reform at a local NGO, Women’s Aid Organization. She then served as programme officer with International Women’s Rights Action Watch Asia Pacific, an international NGO that works for the realization of women’s human rights through the lens of CEDAW and other international human rights instruments. She graduated from Princeton University in 1997 and earned an MS in Law, Policy and Society concurrently with her law degree at Northeastern.

‘This exciting collection of essays by an impressive array of experts takes Musawah’s mission from the critique of injustice and patriarchy in Muslim marriages and family laws to the building of a vision that yearns and works for divinely inspired justice and beauty in Muslim families and communities. The book is bold, radical, and groundbreaking. It will be an indispensable tool for Muslim activists the world over.’
— Juliane Hammer, Associate Professor, Department of Religious Studies, University of North Carolina, Chapel Hill

‘Justice and Beauty in Muslim Marriage addresses the ethical emptiness and lack of poetic sensibility in the patriarchal discourse on women’s rights… The findings of the book, that Muslim marriage laws and normativity are not in line with contemporary understandings of justice, promise a hermeneutic shift towards egalitarian legislation and pluralist normativity.’
— Muhammad Khalid Masud, former Chairman, Council of Islamic Ideology, Pakistan, and former Academic Director, International Institute for the Study of Islam in the Modern World, Leiden University

‘Teeming with provocative and restorative ideas, this book reframes the practice of marriage as it is lived in all its complexities. Drawing on tradition and experience, marriage now becomes a wholesome way of self-fulfillment as expressed by these courageous authors. It is a very timely intervention and much needed. A must-read.’
— Ebrahim Moosa, Mirza Family Chair of Islamic Thought and Muslim Societies, University of Notre Dame