The Ramayana: A Modern Retelling of the Great Indian Epic (Paperback) 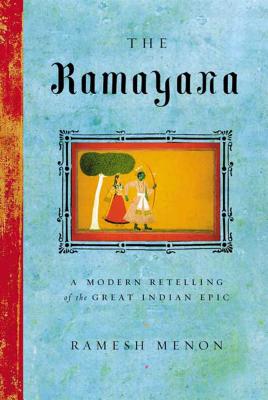 India's most beloved and enduring legend, the Ramayana is widely acknowledged to be one of the world's great literary masterpieces. Still an integral part of India's cultural and religious expression, the Ramayana was originally composed by the Sanskrit poet Valmiki around 300 b.c. The epic of Prince Rama's betrayal, exile, and struggle to rescue his faithful wife, Sita, from the clutches of a demon and to reclaim his throne has profoundly affected the literature, art, and culture of South and Southeast Asia-an influence most likely unparalleled in the history of world literature, except, possibly, for the Bible.

Throughout the centuries, countless versions of the epic have been produced in numerous formats and languages. But previous English versions have been either too short to capture the magnitude of the original; too secular in presenting what is, in effect, scripture; or dry, line-by-line translations. Now novelist Ramesh Menon has rendered the tale in lyrical prose that conveys all the beauty and excitement of the original, while making this spiritual and literary classic accessible to a new generation of readers.

Ramesh Menon is the author of Blue God: A Life of Krishna and The Hunt for K, a national bestseller in India. A former journalist, he lives in Kodaikanal, India.

“Reverent, lyrical, and engaging, Menon's retelling is an impressive addition to the voluminous lore--oral, written, and performed-that collectively comprises the Rama story tradition of India and Southeast Asia. Combining the basic narrative of the ancient Sanskrit epic of Valmiki with strands from medieval devotional versions and hints of Western epic, folktale, and scripture, it brings this great story to life once more for an English-language audience.” —Philip Lutgendorf, Associate Professor of Hindi and Modern Indian Studies, University of Iowa

“This is a beautifully re-told Ramayana. Menon finds the perfect balance of detail and narrative excitement. It's the best single-volume version of the Ramayana.” —Ariel Glucklich, Associate Professor of Hinduism, Georgetown University, author of Sacred Pain and Climbing Chamundi Hill (forthcoming).