The Social Conquest of Earth (Paperback) 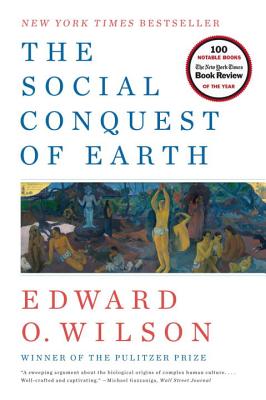 New York Times Bestseller and Notable Book of the Year

A Kirkus Reviews Book of the Year (Nonfiction)

Longlisted for the Andrew Carnegie Medal for Excellence (Nonfiction)

From the most celebrated heir to Darwin comes a groundbreaking book on evolution, the summa work of Edward O. Wilson's legendary career.

Sparking vigorous debate in the sciences, The Social Conquest of Earth upends “the famous theory that evolution naturally encourages creatures to put family first” (Discover). Refashioning the story of human evolution, Wilson draws on his remarkable knowledge of biology and social behavior to demonstrate that group selection, not kin selection, is the premier driving force of human evolution. In a work that James D. Watson calls “a monumental exploration of the biological origins of the human condition,” Wilson explains how our innate drive to belong to a group is both a “great blessing and a terrible curse” (Smithsonian). Demonstrating that the sources of morality, religion, and the creative arts are fundamentally biological in nature, the renowned Harvard University biologist presents us with the clearest explanation ever produced as to the origin of the human condition and why it resulted in our domination of the Earth’s biosphere.

Edward O. Wilson (1929-2021) was the author of more than thirty books, including Anthill, Letters to a Young Scientist, and The Conquest of Nature. The winner of two Pulitzer Prizes, Wilson was a professor emeritus at Harvard University and lived with his wife in Lexington, Massachusetts.

Wilson has done an impressive job of pulling all this evidence together and analyzing it. His interdisciplinary approach, his established scholarship, and his willingness to engage hot-button issues are all much in evidence in The Social Conquest of Earth…. His reflections on this subject are varied, original, and thought provoking—as is the rest of his book.

I just finished The Social Conquest of Earth, a fabulous book.

Wilson offers a full explanation of his latest thinking on evolution. . . . The book is bound to stir controversy on these and other subjects for years to come.
— Sandra Upson and Anna Kuchment - Scientific American

Once again, Ed Wilson has written a book combining the qualities that have brought his previous books Pulitzer Prizes and millions of readers: a big but simple question, powerful explanations, magisterial knowledge of the sciences and humanities, and beautiful writing understandable to a wide public.
— Jared Diamond, Pulitzer-Prize-winning author of Guns, Germs and Steel

With his probing curiosity, his dazzling research, his elegant prose and his deep commitment to bio-diversity, Pulitzer Prize-winning biologist (The Ants) and novelist (The Anthill) Edward O. Wilson has spent his life searching for the evolutionary paths by which humans developed and passed along the social behaviors that best promote the survival of our species. His eloquent, magisterial and compelling new book offers a kind of summing-up of his magnificent career.... While not everyone will agree with Wilson’s provocative and challenging conclusions, everyone who engages with his ideas will discover sparkling gems of wisdom uncovered by the man who is our Darwin and our Thoreau.

A monumental exploration of the biological origins of the Human Condition!
— James D. Watson

A huge, deep, thrilling work, presenting a radically new but cautiously hopeful view of human evolution, human nature, and human society. No one but E. O. Wilson could bring together such a brilliant synthesis of biology and the humanities, to shed light on the origins of language, religion, art, and all of human culture.
— Oliver Sacks

E. O. Wilson’s passionate curiosity—the hallmark of his remarkable career—has led him to these urgent reflections on the human condition. At the core of The Social Conquest of Earth is the unresolved, unresolvable tension in our species between selfishness and altruism. Wilson brilliantly analyzes the force, at once creative and destructive, of our biological inheritance and daringly advances a grand theory of the origins of human culture. This is a wonderful book for anyone interested in the intersection of science and the humanities.

— Stephen Greenblatt, author of The Swerve: How the World Became Modern

Wilson is a brilliant stylist, and his account of the rise of Homo sapiens and our species’ conquest of Earth is informative, thrilling, and utterly captivating.
— Rudy M. Baum - Chemical & Engineering News