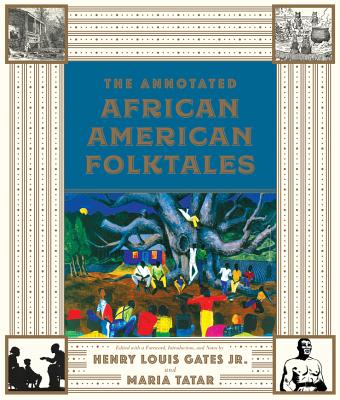 These nearly 150 African American folktales animate our past and reclaim a lost cultural legacy to redefine American literature.

Drawing from the great folklorists of the past while expanding African American lore with dozens of tales rarely seen before, The Annotated African American Folktales revolutionizes the canon like no other volume. Following in the tradition of such classics as Arthur Huff Fauset’s “Negro Folk Tales from the South” (1927), Zora Neale Hurston’s Mules and Men (1935), and Virginia Hamilton’s The People Could Fly (1985), acclaimed scholars Henry Louis Gates Jr. and Maria Tatar assemble a groundbreaking collection of folktales, myths, and legends that revitalizes a vibrant African American past to produce the most comprehensive and ambitious collection of African American folktales ever published in American literary history. Arguing for the value of these deceptively simple stories as part of a sophisticated, complex, and heterogeneous cultural heritage, Gates and Tatar show how these remarkable stories deserve a place alongside the classic works of African American literature, and American literature more broadly.

Opening with two introductory essays and twenty seminal African tales as historical background, Gates and Tatar present nearly 150 African American stories, among them familiar Brer Rabbit classics, but also stories like “The Talking Skull” and “Witches Who Ride,” as well as out-of-print tales from the 1890s’ Southern Workman. Beginning with the figure of Anansi, the African trickster, master of improvisation—a spider who plots and weaves in scandalous ways—The Annotated African American Folktales then goes on to draw Caribbean and Creole tales into the orbit of the folkloric canon. It retrieves stories not seen since the Harlem Renaissance and brings back archival tales of “Negro folklore” that Booker T. Washington proclaimed had emanated from a “grapevine” that existed even before the American Revolution, stories brought over by slaves who had survived the Middle Passage. Furthermore, Gates and Tatar’s volume not only defines a new canon but reveals how these folktales were hijacked and misappropriated in previous incarnations, egregiously by Joel Chandler Harris, a Southern newspaperman, as well as by Walt Disney, who cannibalized and capitalized on Harris’s volumes by creating cartoon characters drawn from this African American lore.

Presenting these tales with illuminating annotations and hundreds of revelatory illustrations, The Annotated African American Folktales reminds us that stories not only move, entertain, and instruct but, more fundamentally, inspire and keep hope alive.

Henry Louis Gates, Jr. (Ph.D.Cambridge), is Alphonse Fletcher University Professor and Director of the W. E. B. Du Bois Institute for African and American Research, Harvard University. He is the author of Life Upon These Shores: Looking at African American History, 1513–2008; Black in Latin America; Tradition and the Black Atlantic: Critical Theory in the African Diaspora; Faces of America; Figures in Black: Words, Signs, and the Racial Self; The Signifying Monkey: A Theory of Afro-American Criticism; Loose Canons: Notes on the Culture Wars; Colored People: A Memoir; The Future of Race with Cornel West; Wonders of the African World; Thirteen Ways of Looking at a Black Man; and The Trials of Phillis Wheatley. His is also the writer, producer, and narrator of PBS documentaries Finding Your Roots; Black in Latin America; Faces of America; African American Lives 1 and 2; Looking for Lincoln; America Beyond the Color Line; and Wonders of the African World. He is the editor of African American National Biography with Evelyn Brooks Higginbotham, and The Dictionary of African Biography with Anthony Appiah; Encyclopedia Africana with Anthony Appiah; and The Bondwoman’s Narrative by Hannah Crafts, as well as editor-in-chief of TheRoot.com.

Maria Tatar is the John L. Loeb Research Professor and a Senior Fellow at Harvard University. The editor of the Norton Critical Edition of The Classic Fairy Tales and The Annotated Brothers Grimm, she lives in Cambridge, Massachusetts.

A journey across space and time…Annotated African American Folktales reclaims stories passed down from slavery.

An exhaustive collection for both academic and casual audiences…Gates' and Tatar's introductions provide essential critical frameworks for understanding black folk culture's centrality to wider American culture, while the secondary sources shed light on the various methodologies and philosophies that have informed how scholars gather folklore. An exhaustive, informative, and entertaining survey of African-American folklore, its centrality to American culture, and the universality of myth.
— Kirkus Reviews

Panoramic…Extensively sourced, this groundbreaking gathering redefines African American folklore, establishes a canon, and traces the influence of these stories on American history, society, and culture. A rigorous achievement and a worthy and fascinating addition to any folklore, African American studies, or American literature collection.
— Booklist