Weird Yet Strange: Notes from an Austin Music Artist (Paperback) 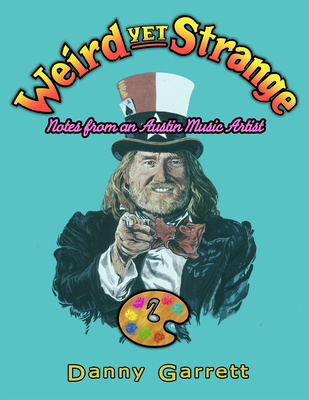 Weird Yet Strange is a collection of the music art created by Danny Garrett from the ’70s and ’80s in Austin, Texas, including artwork for Armadillo World Headquarters, Antone’s, Willie Nelson, Stevie Ray Vaughan, and many other artists and venues.

Garrett began creating music art at the same time that such art began to chronicle the establishment of the Austin music scene in the early 1970s. Over the course of the next two decades, Texas’s capital city became a world-renowned music mecca, and Austin music artists played a vital role in capturing and sharing the vibrant culture swelling within what would become the “Live Music Capital of the World.”

Describing the evolution of the Austin music poster, Garrett richly and poignantly details the history of the music, musicians, and venues that brought the surprising harmony of “the Austin sound” to a country otherwise polarized by antagonistic cultural, social, and political perspectives.

A Texas native, DANNY GARRETT was drafted into the service for the Vietnam War in 1968. Following his service, he moved to Austin, where he began to practice his poster art for Armadillo World Headquarters, Antone’s, and many other clients. Garrett’s posters promoted the appearances of such legends as Muddy Waters, B. B. King, Stevie Ray Vaughan, Willie Nelson, and Eric Clapton. Garrett has also produced a substantial body of film and computer game work, in addition to teaching art and design at Austin Community College and Auckland University of Technology in New Zealand. He lives with his wife, Kelley, in the Texas Hill Country, where he continues to draw, paint, and write.