The La Salle Expedition to Texas: The Journal of Henri Joutel, 16841687 (Hardcover) 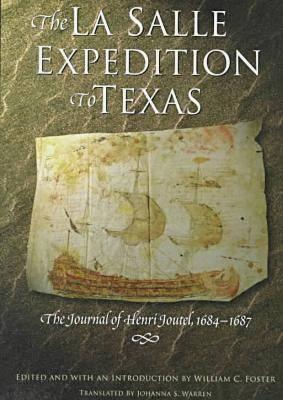 "Those of us who knew how to swim crossed to the other bank. But a number of our company did not know how to swim, and I was among that number. One of the Indians gave me a sign to go get a nearly dry log . . . then, fastening a strap on each end, he made us understand that we should hold on to the log with one arm and try to swim with the other arm and our feet . . . While trying to swim . . . I accidentally hit the Father in the stomach. At that moment he thought he was lost and, I assure you, he invoked the patron saint of his order, St. Francis, with all his heart. I could not keep from laughing although I could see I was in peril of drowning. But the Indians on the other side saw all this and came to our help . . . "Still there were others to get across. . . . We made the Indians understand that they must go help them, but because they had become disgusted by the last trip, they did not want to return again. This distressed us greatly."--From Henri Joute's journal, March 23, 1687, shortly after La Salle was murdered. The La Salle Expedition in Texas presents the definitive English translation of Henri Joutel's classic account of Rene-Robert Cavelier, Sieur de La Salle's 1684-1687 expedition to establish a fort and colony near the mouth of the Mississippi River. Written from detailed notes taken during this historic journey, Joutel's journal is the most comprehensive and authoritative account available of this dramatic story of adventure and misadventure in Texas. Joutel, who served as post commander for La Salle, describes in accurate and colorful detail the daily experiences and precise route La Salle's party followed in 1687 from the Texas coast to the Mississippi River. By carefully comparing Joutel's compass directions and detailed descriptions to maps and geographic locations, Foster has established where La Salle was murdered by his men, and has corrected many erroneous geographic interpretations made by French and American scholars during the past century. Joutel's account is a captivating narrative set in a Texas coastal wilderness. Foster follows Joutel, La Salle, and their fellow adventurers as they encounter Indians and their unique cultures; enormous drifting herds of bison; and unknown flora and fauna, including lethal flowering cactus fruit and rattlesnakes. The cast of characters includes priests and soldiers, deserters and murderers, Indian leaders, and a handful of French women who worked side-by-side with the men. It is a remarkable first hand tale of dramatic adventure as these diverse individuals meet and interact on the grand landscape of Texas. Joutel's journal, newly translated by Johanna S. Warren, is edited and annotated with an extensive introduction by William C. Foster. The account is accompanied by numerous detailed maps and the first published English translation of the testimony of Pierre Meunier, one of the most knowledgeable and creditable survivors of La Salle's expedition.

WILLIAM C. FOSTER, an independent scholar of Texas history, has been a partner in the Washington, D.C., law firm of Patton Boggs, L.L.P., for the past twenty-five years. He is the author of several books on early Texas, including Imaginary Kingdom Texas as Seen by the Rivera and Rubi Military Expeditions, 1727 and 1767, published by the TSHA.