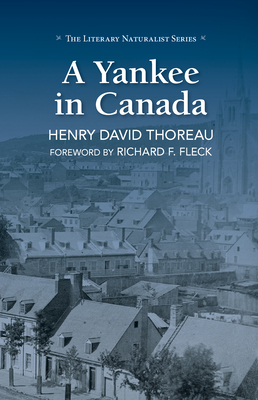 In the fall of 1850 Henry Thoreau embarked upon an excursion into the French-Canadian province of Quebec, with stops in Montreal and Quebec City. His reactions to the foreign country are mixed and ambivalent: he is critical of Canada's Old World Catholicism, feudalism, and an alien British military presence while most of his references to America and Americans are favorable. But if one looks closely, positive reactions to Canadian society and negative reactions to American society do exist within the essay. A YANKEE IN CANADA is a study in paradox, the paradox being due to a man stunned by his only international experience. In this sense A YANKEE IN CANADA parallels Mark Twain's INNOCENTS ABROAD in that both authors are experiencing culture shock expressed with all the elements of a mental twilight zone of grays, not just black and white. Unlike the many facsimile reproductions available, this edition features a modern design that enhances readability. A YANKEE IN CANADA is now part of the Literary Naturalist Series and features a new foreword by noted literary scholar Richard F. Fleck.

Richard Fleck is author of DESERT RIMS TO MOUNTAINS HIGH, and also foreword writer for the WestWinds Press: Literary Naturalist Series which includes ALASKA DAYS WITH JOHN MUIR, THE MAINE WOODS, and THE CRUISE OF THE CORWIN. He is editor of A COLORADO RIVER READER. At age seventy-six he remains active by climbing mountains and guiding Sierra Club hikes in Colorado and Utah. He is married to Maura and has three children and seven grandchildren.