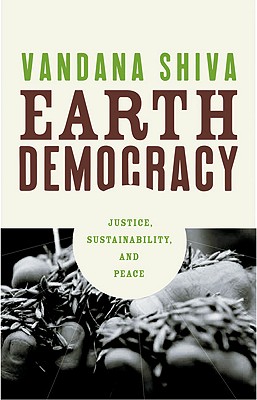 By Vandana Shiva
$40.00
Not available to order

Boldly confronting the neoconservative Project for the New American Century, world-renowned physicist and activist Vandana Shiva responds with "Earth Democracy," or, as she prophetically names it, "The People's Project for a New Planetary Millennium." A leading voice in the struggle for global justice and sustainability, here Shiva describes what earth democracy could look like, outlining the bedrock principles for building living economies, living cultures and living democracies.

Starting from the initial enclosure of the commons--the privatization of six million acres of public land in eighteenth-century Britain--Shiva goes on to reveal how the commons continue to shrink as more and more natural resources are patented and fenced. Accompanying this displacement from formerly accessible territory, she argues, is a growing attitude of disposability that erodes our natural resources, ecological sustainability and cultural diversity. Worse, human beings are by no means safe from this assignment of disposability. Through the forces of neoliberal globalization, economic and social exclusion work in deadly synergy to perpetrate violence on vulnerable groups, extinguishing the lives of millions.

Yet these brutal extinctions are not the only trend shaping human history. Forthright and energetic, Vandana Shiva updates readers on the movements, issues and struggles she helped bring to international attention--the genetic engineering of food, the theft of culture and the privatization of natural resources--and deftly analyzes the successes and new challenges the global resistance now faces. From struggles on the streets of Seattle and Cancun and in homes and farms across the world has grown a set of principles based on inclusion, nonviolence, reclaiming the commons and freely sharing the earth's resources. These ideals, which Shiva calls "earth democracy," will serve as unifying points in our current movements, an urgent call to peace and the basis for a just and sustainable future.

A world-renowned environmental leader and recipient of the 1993 Alternative Nobel Peace Prize (the Right Livelihood Award), Shiva has authored several bestselling books, most recently Earth Democracy. Activist and scientist, Shiva leads, with Ralph Nader and Jeremy Rifkin, the International Forum on Globalization. Before becoming an activist, Shiva was one of India's leading physicists.