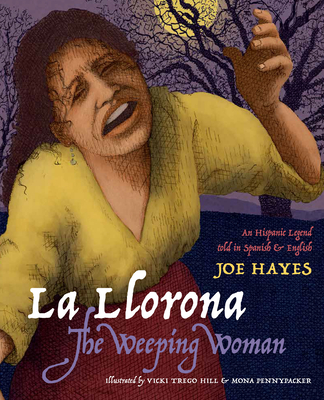 La Llorona (yoh-ROH-nah) / The Weeping Woman is the ghost story to end all ghost stories, capturing the minds of both kids and adults in the U.S. and Mexico. In Spanish and English, master storyteller JOE HAYES retells the tale of a beautiful woman whose fear and jealousy dooms her to an eternal search for all she's lost. It appears at first to be only a frightening story filled with mysterious events that cause children to sit wide-eyed, huddling together, listening spellbound. Yet it's the simple, universal wisdom at the core of the story that finally works its magic in their hearts.

La Llorona is available in a four-color edition in both paper and cloth. Joe's chilling story of the crying ghost woman has sold over 600,000 copies and is truly the best known and most popular story of Hispanic America. La Llorona has more staying power than Batman and Wonder Woman combined. As proof, librarians tell us that Joe Hayes'La Llorona leaves the library more than they do, often not even bothering to come back--kids love her that much. She gives them the shivers

Joe Hayes is one of America's premier storytellers. He grew up in a small town in southern Arizona where he learned Spanish from his classmates. As he got older, Joe began gathering old stories from the Southwest. Joe has earned a distinctive role as a bilingual storyteller. Vicki Trego Hill lives in El Paso, Texas, where she makes a living as a graphic design artist and illustrator. Mona Pennypacker is an artist and illustrator. This is her first book collaborating with her mother Vicki Trego Hill.

"The illustrations by mother-daughter team Hill and Pennypacker add depth to the story…Deeper colors are used to depict the couple and infant children in happier times. Shaded pictures and silhouettes add to the feelings of deception, desertion, and despair that came later. Best if read aloud. Recommended to all libraries and bookstores." —Críticas

"This new edition features much larger, full-color illustrations destined to make the story even more popular, as well as the direct narration in both Spanish and English. This belongs in every folktale collection, and libraries serving Hispanic children, especially those of Mexican descent, can easily justify purchasing multiple copies." —Kirkus Reviews

"This story packs a punch in both English and the author's fluid Spanish translation…A solid retelling of a classic tale." —School Library Journal

"This story is presented in both English and Spanish, and has a companion audiocassette. The richly detailed illustrations in brown hues capture the town, its residents, and their clothing." —Multicultural Children's Literature

"This popular Hispanic legend is told here in both Spanish and English and warns children about the dangers of venturing out past their bedtimes…This book would be useful in multicultural and/or language arts lessons."—Children's Literature

"The traditional Latino story of a cast-off wife who drowns her children, dies of grief, and spends each night thereafter stalking the riverbank as a wailing ghost finds corporeality in this bilingual picture book. Hayes’ sentences are compact but evocative; he limits the ghostly effects, making this telling more suitable for timid youngsters than creepier versions, but there’s still plenty of pathos in the drama."—The Bulletin of the Center for Children’s Book

"Even though this is a printed book, you can imagine Hayes telling the story aloud, surrounded by kids in a shadowy room, perhaps with only a blazing fireplace for light, and as he concludes the tale, the kiddies shiver and move a little closer…" —The Santa Fe New Mexican

"Joe Hayes is considered one of the authorities on the story and has retold it countless times. He’s also authored a version recently reissued in hardback, which tells the infamous story in both Spanish and English."—McAllen Monitor

" Every child who ever heard the tale of La Llorona knows that she is still out there, wailing and looking for her children -- or maybe someone else's. Young readers with a vivid imagination can't go wrong with a Joe Hayes storybook. He is a good read any time of year. You don't have to wait for ghosts to come knocking or howling."—El Paso Times