Rife's World of Electromedicine: The Story, the Corruption and the Promise (Paperback) 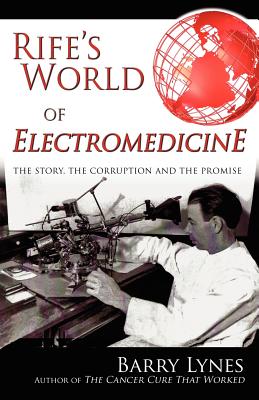 In 1987, Barry Lynes wrote the classic book on Rife history called The Cancer Cure That Worked. Rife's World of Electromedicine is the sequel, published in 2009. What is the difference between the two books? The Cancer Cure That Worked was primarily a biographical account of Royal Raymond Rife's life and work, including detailed, dated records of the events which occurred, and in-depth accounts from the people involved. Rife's World of Electromedicine, on the other hand, is a bird's eye view, short summary of the same time period and events. Instead of a detailed biography, Rife's World is an expository piece that includes brief, targeted chapters addressing each aspect of Rife's era, utilizing piercing, specific, and direct quotes and excerpts from historical documents including magazine and newspaper articles, court transcripts, Rife's own statements, and the eye-witness accounts of those who were present during Rife's lifelong achievements. Written as a short story, Rife's World is affordably priced so that everyone can read about Royal Raymond Rife. The book is a perfect gift for someone who wants to find out more about Rife but doesn't have time to read a longer book. Additionally, the new book explains what 20+ years of additional research and document retrieval by a dedicated grass roots group have discovered and unearthed. Some of the previously missing, key factors in the suppressed and censored cure for cancer were lost or even locked away in physicians' closets for decades in order to prevent censors from destroying overwhelming evidence. Now, this evidence is printed for the first time in Rife's World.