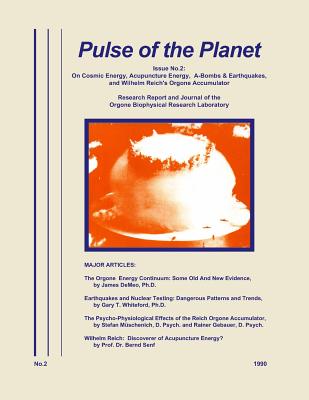 First published in 1990, Pulse of the Planet No.2 continued with an ambitious program for global monitoring of geophysical events potentially caused by underground atomic bomb testing, as well as for atmospheric and biological anomalies and extremes. Weekly world maps were prepared identifying the times and locations of major droughts, floods, earthquakes, hurricanes, air pollution crises and other violent weather, in efforts to comprehend the totality of bioenergetic coherence in nature. Articles detailed a new double-blind study of Wilhelm Reich's orgone energy accumulator, undertaken at a German university, plus new findings on orgone-acupuncture. An additional article reviewed old and new evidence on the subject of the cosmic ether of space, and related findings in biology, chemistry and astrophysics. This second issue of Pulse contains the following items: * By James DeMeo: "The Orgone Energy Continuum: Some Old and New Evidence" * By Gary T. Whiteford: "Earthquakes and Nuclear Testing: Dangerous Patterns and Trends" * By Stefan Muschenich and Rainer Gebauer: "The Psycho-Physiological Effects of the Reich Orgone Accumulator" * By Bernd Senf: "Wilhelm Reich: Discoverer of Acupuncture Energy?" * Conference Reports * Environmental Notes * Science Notes * Health Notes * Sex-Economic Notes * Emotional Plague Notes * Climate Features and Unusual Phenomena * Planetary Clock * Research Progress Report * Cosmic Orgone Engineering Report * Orgonomic Research and Publications Review * Calendar of Events * Orgonomic Observations * Letters to the Editor. Pulse of the Planet journal continued for additional years, presenting many articles on these and similar subjects. The original edition of Pulse No.2 went out of print years ago, but is now made available once again given the importance of the materials, both for the issues they raise, as well as for historical value.