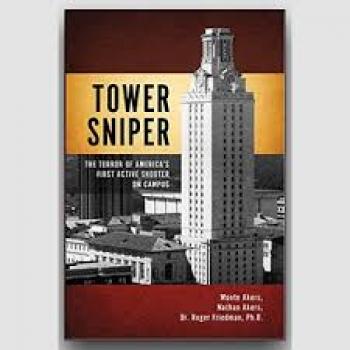 By Monte Akers, Nathan Akers, Ph.D. Friedman, Roger
$24.95
Backordered. Place an order and we will let you know when to expect your book.

On August 1, 1966, University of Texas engineering student Charles Whitman went to the top of the 307-foot campus tower. Over the next 96 minutes he shot and killed 15 people and wounded 31. Tower Sniper: The Terror of America’s First Campus Active Shooter, by Monte Akers, Nathan Akers, and Dr. Roger Friedman, explores the history and personal experience of this seminal tragedy, enriches public memory, and advances our understanding of mass shootings that continue to haunt America.

Monte Akers is an attorney practicing in Austin, Texas. He is the author of Flames After Midnight: Murder, Vengeance, and the Desolation of a Texas Community (University of Texas Press, 1999 & 2011); Tales for the Telling: Six Short Stories of the Ciril War on CO (Cold Creek Productions: 2005); The Accidental Historian: Tales of Trash and Treasure (Texas Tech University Press, October, 2010), Year of Glory: The Life and Campaigns of J.E.B. Stuart, June, 1862 to June 1863 (Casemate Publishing, 2012); and Year of Desperate Struggle: Jeb Stuart and His Cavalry from Gettysburg to Yellow Tavern, 1863-1864 (Casemate Publishing, 2014).

Nathan Akers graduated from Texas State University with a degree in History in 2013. As a 20-year resident of Austin, Nathan developed a passion for state and local history. He has previously assisted in research for a number of historical books and articles but this is the first book in which he has co-authored. He currently works in the field of education and lives in Arlington, Texas with his wife Alexis and two beautiful daughters: Madison and Harper.

Roger Friedman, Ph.D. is a psychologist and social worker in clinical practice for 35 years in the Washington, D.C. area. He has published many professional articles about the lasting effects of trauma on victims and responders, and has served nationally as a clinical consultant to Mental Health and Social Service Programs. Dr. Friedman is on the Adjunct Faculty at the University Of Maryland School Of Social Work where he teaches about psychopathology and family therapy. He is working on a memoir of growing up in Texas during the 1950s and 1960s. On August 1, 1966, two months after Roger graduated from high school in Austin, his closest childhood friend, Paul Sonntag, was shot and killed by the Tower sniper.