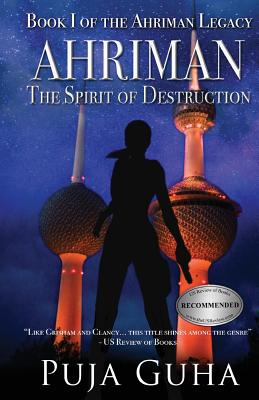 "Like Grisham and Clancy... this title shines among the genre." -The US Review of Books

Homeland meets Syriana in the near future.

Fast paced suspense that fans of global espionage thrillers like Patriot Games, The Day of the Jackal, and The Spy Who Came in from the Cold will love.

When the CIA intercepts intelligence on a terrorist attack in Kuwait, Petra Shirazi, a former field agent, comes face to face with the Ahriman, one of Iran's deadliest assassins.

After a disastrous mission forces her out of the field, Petra Shirazi retires from a life of espionage to work in a research position.

Three years later, her division stumbles upon a money trail that reveals a massive new wave of terrorist attacks. The money trail places her in the midst of an assassination plot that implicates the highest levels of the Kuwaiti and Iranian governments.

Petra will find herself face to face with the Ahriman, a man named for the Persian spirit of destruction who is responsible for a series of bomb blasts that paralyzed the Suez Canal two years earlier.

As the investigation begins to unravel, the ripple effects threaten to engulf not only the Middle East and its Western allies, but also the darkest secrets of Petra's past.