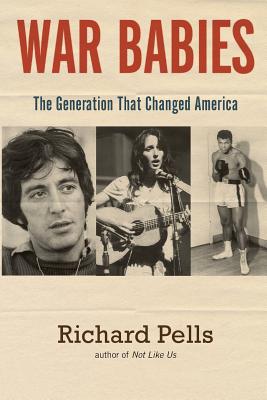 War Babies: The Generation That Changed America examines the lives and careers of Americans born between 1939 and 1945. No one has written such a book about this generation. War Babies deals especially with musicians and composers like Joan Baez, Bob Dylan, and Simon and Garfunkel; with film directors like Francis Ford Coppola and Martin Scorsese; with actors like Al Pacino and Robert De Niro; with athlete/activists like Muhammad Ali; with journalists like Bob Woodward and Carl Bernstein; and with politicians like John Kerry and Nancy Pelosi. These are the people who continue to shape our lives and cultures in the 21st century.

Richard Pells received his B.A. from Rutgers University in 1963 and his Ph.D. in history from Harvard in 1969 where he taught for three years. Subsequently, he was awarded fellowships from the Rockefeller Foundation, the Woodrow Wilson International Center for Scholars, and the Guggenheim Foundation, as well as six Fulbright chairs and lectureships for teaching abroad, particularly in Europe and Asia. Currently, he is Professor of History Emeritus at The University of Texas at Austin. Visit the author at http: //www.richardpells.com. Pells was never a traditional historian. He is primarily interested in 20th century American culture-movies, radio, television, art, music, literature, and the theater, all of which are reflected in his five books. Through his work, readers are treated to a history of American cultural life from the 1930s to the present. War Babies is a prime example of the concerns and issues that have shaped Pells's career.