Marilyn: A Woman In Charge (Hardcover) 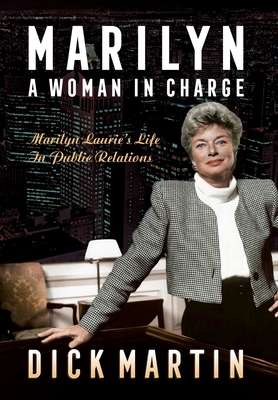 Marilyn Laurie was a self-described "little Jewish girl from the Bronx" who became one of the world's top public relations counselors and the first woman in the top policy-making councils of a Fortune 10 company.

Her career mirrored the social and political upheaval of the 20th century's last three decades. After helping launch Earth Day in 1970, she was hired by AT&T to encourage employee recycling. Marilyn: A Woman In Charge tells the behind-the-scenes story of how she who worked her way from that humble assignment into the corridors of power.

When she died in 2010, Marilyn had received practically every award available to public relations practitioners. But few knew the tortuous path she journeyed to the top of her field. In a career bookended by systemic sexism and gender stereotyping, she refused to stay in the lane assigned to her by gender. When others dodged and weaved to avoid conflict, she ran towards problems, even at the risk of becoming associated with them.

Her life story is a lesson in public relations leadership at the highest levels. It's a story of chance and cunning, of heady highs and humbling lows, and the gift of grace and resilience.

A second-generation immigrant, Marilyn was raised in the Bronx and never lost the flat accents and directness of its streets and alleyways. She attended Barnard College in the second half of the 1950's, where she learned that women need not live their lives solely through husband and children. She graduated intending to apply her full capacities to meaningful goals outside herself.

She first found goals worthy of her full capacities in environmentalism. Then, almost by accident, she found such goals at AT&T. When she joined the company, it was literally "The Telephone Company," handling more than nine out of ten phone calls in the U. S. For nearly a century, its mission had been to put a telephone within an arm's reach of every household.

A regulated monopoly, its very existence depended on earning and keeping the public's trust, a goal she believed depended more on what the company did than what it said. She was also there when AT&T lost its footing in the wake of technological, social, and political change, and she worked just as hard to help it regain its balance.

Based on the author's first-hand experience, archival files, and interviews with friends, colleagues, and family members, Marilyn: A Woman In Charge reveals the behind-the-scenes story of a woman who broke through the proverbial glass ceiling within a great American company. It describes how she won and kept a seat at the policy-making table, how she defined the role of public relations, and how she dealt with crises arising both from the company's missteps and from the agendas of special interests.