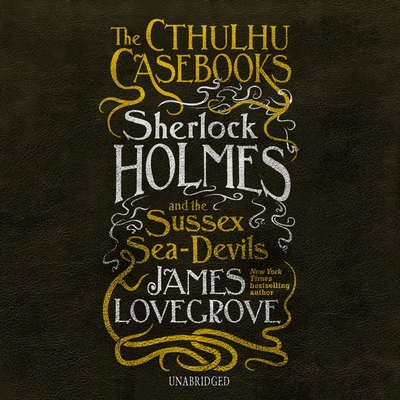 By James Lovegrove, Dennis Kleinman (Read by)
$34.95
Out of Stock; Usually Arrives in 2-5 Days

It is the autumn of 1910, and for fifteen long years, Sherlock Holmes and Dr. John Watson have battled R'lluhloig, the Hidden Mind that was once Professor James Moriarty. Europe is creeping inexorably towards war, and a more cosmic conflict is nearing its zenith, as in a single night all the most eminent members of the Diogenes Club die horribly, seemingly by their own hands. Holmes suspects it is the handiwork of a German spy working for R'lluhloig, but his search for vengeance costs an old friend his life.

The companions retreat to Holmes's farm on the Sussex Downs, and it is not long before a client comes calling. Three young women have disappeared from the nearby town of Newford, and the locals have no doubt who is responsible. For legend has it that strange amphibious creatures dwell in a city on the seabed, coming ashore every few centuries to take fresh captives. As Holmes and Watson seek out the terrifying interlopers, the scene is set for the final battle that will bring them face to face with the Sussex Sea-Devils, and perhaps with Cthulhu himself ...