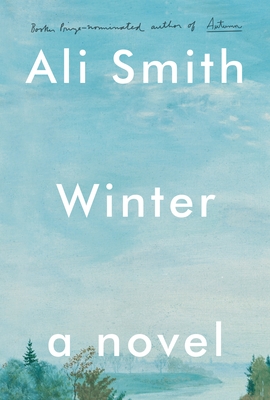 From Man Booker Prize Finalist Ali Smith, Winter is the second novel in her Seasonal Quartet. This much-anticipated follow-up to Autumn is one of the Best Books of the Year from the New York Public Library.

“A stunning meditation on a complex, emotional moment in history.” —Time

Winter. Bleak. Frosty wind, earth as iron, water as stone, so the old song goes. And now Art’s mother is seeing things. Come to think of it, Art’s seeing things himself.

When four people, strangers and family, converge on a fifteen-bedroom house in Cornwall for Christmas, will there be enough room for everyone?

Winter. It makes things visible. Ali Smith’s shapeshifting Winter casts a warm, wise, merry and uncompromising eye over a post-truth era in a story rooted in history and memory and with a taproot deep in the evergreens, art and love.

One of the Best Books of the Year: New York Public Library, Kirkus Reviews

“Smith’s brilliant, breathtakingly immediate sequence . . .  crackles with energy, curiosity, and mischief. . . .Even in the darkest periods, tendrils of life still strive toward the light. . . . Its creator wants to remind us that the pendulum can swing back and that one day the sun will return.”
—Laura Miller, Slate

“[A] moving mixture of the fantastical and the allegorical . . . Topical, sweet-natured, something fun to be inside.”
—James Wood, The New Yorker

“Extremely funny and seriously angry and experimental and heartbreaking, but never sentimental . . . In Winter, the light inside this great novelist’s gorgeous snow globe is utterly original, and it definitely illuminates.”
—Meg Wolitzer, The New York Times Book Review

“It is not necessary to read Smith’s Autumn before her Winter; while the two books share a philosophical style and a playfulness with words, they don’t concern the same cast.  . . . Winter pays frequent homage to A Christmas Carol. . . . [Smith] spins a fine story. . . .  Winter is a stunning meditation on a complex, emotional moment in history.
—Sarah Begley, TIME

“Ali Smith is flat-out brilliant, and she's on fire these days. . . . [Winter] demonstrates yet again Smith's skill at revealing surprising relationships between seemingly disparate narrative threads. . . . You can trust Smith to snow us once again with her uncanny ability to combine brainy playfulness with depth, topicality with timelessness, and complexity with accessibility while delivering an impassioned defense of human decency and art. . . . Once again Smith has balanced darkness with light, bleakness with hope.
—Heller McAlpin, NPR

“Smith has conjured a kind of dream England in Winter an insubordinate folk tale . . . [and Smith] succeeds, jubilantly. . . . There are few writers on the world stage who are producing fiction this offbeat and alluring.”
—Dwight Garner, The New York Times

“Ali Smith’s virtuosic Winter is to pay attention to the world we’ve recently been living in. . . . Smith gives us a potent, necessary source of sustenance that speaks directly to our age. . . . The profound pleasure of these books is their near miracle. . . . [I]n the midst of Winter, each page touched with human grace, you might just begin to believe.”
—Laura Collins-Hughes, The Boston Globe

“[Smith is] a really fearless novelist. . . . Her work is as alive as a fish on the end of a line. . . consistently breathtaking.″
—Charles Finch, Chicago Tribune

“The second in Smith’s quartet of seasonal novels displays her mastery at weaving allusive magic into the tragicomedies of British people and politics. . . . A bleak, beautiful tale greater than the sum of its references.”
—Boris Kachka, Vulture

“A capacious, generous shapeshifter of a novel . . . [A] book with Christmas at its heart, in all its familiarity and estrangement: about time, and out of time, like the festival itself.”
—The Guardian (The Best Fiction of 2017)

“[There are] glimmers of life, laughter and love. . . . Smith threads passages of delicately observed natural beauty throughout the ephemera. She often lets the language itself lead her (hence her love of puns), and the intricate narrative rolls back and forth smoothly in time.”
—The Times Literary Supplement (London)

“Winter is typical of the Scottish writer’s heart-starting (and often heart-stopping) fiction­: all spark, lark and jumper-lead, playful, witty and gloriously challenging. . . . Balancing delicious and irreverent playfulness with deep seriousness, Smith’s engineering of tone and mode is one of many facets of the novel’s appeal.
—The Australian

“Smith's deceptively unshowy writing evokes every shade of emotion. . . . Themes and experiences entangle, making Winter a dense, satisfying read. . . . It's to Smith's credit that Winter works on a number of levels, from a straightforward, quotidian tale about a fractured family to a deeper story packed with symbolism and highbrow literary references: a subtle meditation on loneliness, loss and aging in uncertain times.”
—The Irish Independent

“The novel is lucid and tightly constructed. . . . [I]ts disparate strands converge tautly to convey and deepen Smith’s powerful political message. . . . This wintry spirit of benevolence animates Smith’s vision of a world where empathy overrides divisions and where animosity can melt like snow. . . . Smith’s voice, so wise and joyful, is the perfect antidote to troubled times: raw and bitter in the face of injustice, yet always alive to hope.”
—New Statesman

“Smith combines her state-of-the-moment themes with a preoccupation for how to behave in a meaningful way in an increasingly technocratic world—and she does so with an effervescent seriousness none of her peers can match.”
—Daily Mail

“A novel of great ferocity, tenderness, righteous anger and generosity of spirit that you feel Dickens would have recognised . . . Winter is at its most luminously beautiful when the news fades and merges with recent and ancient history, a reminder that everything is cyclical. There is forgiveness here, and song, and comic resolution of sorts, but the abiding image is of the tenacity of nature and light.”
—The Observer (London)

“Smith has both a telescopic and a microscopic eye. . . . Her many-layered artistry softens rage or sorrow. . . If Ali Smith’s four quartets in, and about, time do not endure to rank among the most original, consoling and inspiring of artistic responses to ‘this mad and bitter mess’ of the present, then we will have plunged into an even bleaker midwinter than people often fear.”
—Financial Times

“One of Britain’s most important novelists . . . Winter is narrated with Smith’s customary stylistic brio . . . punctuated with clever word play . . . Heartwarming.”
—The Irish Times

“Smith’s prose—that trademark mischievous wit and wordplay, a joyful reminder of the most basic, elemental delights of reading—makes us see things differently . . . The entire book is testament to the miraculous powers of the creative arts . . . Winter firmly acknowledges the power of stories. Infused with some much needed humour, happiness and hope.”
—The Independent (London)

“Calm, cool and consoling. . . . But still a sparkler. . . . [A] novel of visions, memories and family relationships.”
—The Spectator

“A novel which, in its very inclusiveness, associative joy, and unrestricted movement, proposes other kinds of vision . . . [A]stonishingly fertile and free . . . [Smith] finds life stubbornly shining in the evergreens . . . told in a voice that is Dickensian in its fluency and mobile empathy . . .  Leaping, laughing, sad, generous and winter-wise, this is a thing of grace.”
—The Guardian

“Combines comedy with social criticism, playfulness with political indictment . . . Structurally, the book is intricate: a collage of flashbacks, flash-forwards and interior monologues . . . Smith is a self-consciously aesthetic writer who also has strong political convictions.”
—The Sunday Times (London)

“If Ali Smith’s four quartets in, and about, time do not endure to rank among the most original, consoling and inspiring of artistic responses to 'this mad and bitter mess' of the present, then we will have plunged into an even bleaker midwinter than people often fear.”
—Financial Times

“Refracted through the lens of a broken family in a broken home, Smith’s vision is almost without redemption, but not quite; beneath the frozen ground, some hope exists.”
—The Times (London)

“a novel of great ferocity, tenderness, righteous anger and generosity of spirit . . . Winter is at its most luminously beautiful when the news fades and merges with recent and ancient history, a reminder that everything is cyclical. There is forgiveness here, and song, and comic resolution of sorts, but the abiding image is of the tenacity of nature and light.”
—The Observer

“(Smith) is cresting across the contemporary in a manner few novelists can manage. . . . Winter is a novel in which the cold also reveals clarity. Things crystallize. They become piercing and numbing at the same time. It is a book about being wintry in the sense of supercilious and hibernal, in its sense of wanting to shut the world out. The characters have to deal with both impulses, and deal with them in different ways. But the end result is a book that makes one think, and thinky books are rare as hen’s teeth these days.”
—The Scotsman