Finale: A Novel of the Reagan Years (Paperback) 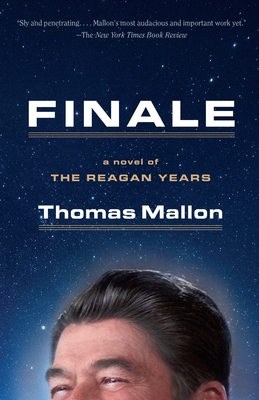 One of the Best Books of the Year: San Francisco Chronicle, The Daily Beast, The Miami Herald, St. Louis Post-Dispatch

Before there was Reagan the conservative icon, there was Reagan the president: genial, unknowable, faced with doubters, scandals, and the final throes of the Cold War. In this extraordinary novel, Thomas Mallon takes us to the tense, high-stakes months in 1986 when—with the Iran-Contra affair, the AIDS epidemic, and the Reykjavik summit with Gorbachev—Reagan and those around him were shaping history. We see Nancy Reagan—brooding, protective, consulting her astrologist at every turn. We see the young Christopher Hitchens—his incisive, acerbic voice lending a powerful counterpoint to events as they unfold. And we see Reagan himself: apparently warm but in fact distant and mercurial, by turns seeming to know more than he lets on and let on more than he knows. Written with impeccable language and savage wit, Finale is historical fiction of the highest order, brilliantly rendering the human drama behind these famous—and familiar—faces.

Thomas Mallon is the author of nine novels, including Henry and Clara, Dewey Defeats Truman, Fellow Travelers, and Watergate. He is a frequent contributor to The New Yorker and The New York Times Book Review, and in 2011 he received the American Academy of Arts and Letters’ Harold D. Vursell Memorial Award for prose style. He has been the literary editor of GQ and the deputy chairman of the National Endowment for the Humanities. He lives in Washington, D.C.

“Sly and penetrating. . . . Mallon’s most audacious and important work yet.” —The New York Times Book Review

“[A] scintillating comic epic of politics. . . . Mallon follows his troupe across thousands of miles, capturing what happens with rapier wit.” —San Francisco Chronicle

“A story about the limits of human ambition. . . . Wicked good, that Thomas Mallon.” —The Washington Post

“Finale offers a certifiable slice of the recent past but teases its readers with subtle fictionalization . . . Mallon handles it with an easy mastery.” —The Wall Street Journal

“Richly imagined. . . . Mallon offers a useful reminder that Presidential reputations often improve with the passage of time.” —The New Yorker

“Masterful performances, by the author and by his subject.” —Dallas Morning News

“Gorbachev, Thatcher, the Gipper himself—the gang’s all here and ready to party like it’s 1986 in this propulsive and often very funny novel that portrays political upheaval through the eyes of some of recent history’s most formidable players.” —O, The Oprah Magazine

“Full of witty, sometimes withering and often surprisingly sympathetic portraits of the characters clustered around the ever-unknowable president.” —Chicago Tribune

“Vivid. . . . Mallon impressively blends his singular knowledge of political history with his limitless imagination to capture an era.” —The Philadelphia Inquirer

“[Mallon] sculpts characters who embody the folly and frustration of political power. . . . Mallon has become a master of such political theater. . . . Combin[es] broad historical accuracy and fictional verisimilitude with aplomb.” —The Christian Science Monitor

“Mr. Mallon isn't just a gifted novelist; he also has a sound working knowledge of Washington ways. . . . A splendid example of the genre at its best.” —Washington Times

“Captur[es] the texture of the times with a dry wit and a keen eye for subtle insights. . . . His renderings of Hitchens’s tartness are dead on, and many of the one-liners about other figures zing off the page. . . . He has captured the mood and feel of the late 1980s perfectly.” —National Review

“What a pleasure it is to enter the rough-and-tumble politics of Thomas Mallon’s historical novels. . . . Mallon captures that uncertain tenor of the times while portraying the complex drama of high-level politics with real clarity and energy.” —The AV Club

“One of this novel’s many joys is the beauty and elegance of its prose. . . . [Mallon] reminds us that history is not about facts and dates; it’s the greatest story ever told.” —The Miami Herald

“Mr. Mallon can twist language like a knife. . . . [He] skillfully interweaves the personal and the political. . . . Mr. Mallon’s vivid take on this period in American politics rings true.” —Pittsburgh Post-Gazette

“An intriguing, humorous, even catty backstage view of the Reagan presidency from an artisan of the historical novel.” —Kirkus Reviews (starred)