The Night of the Hunter: A Thriller (A Vintage Movie Classic) (Paperback) 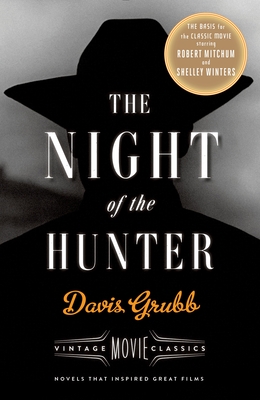 “When I saw that we had the novel on our shelves, I grabbed it and
began reading immediately. The classic 1955 film of the same name
starring Robert Mitchum has long been one of my favorite films, but I
had no idea it began as a novel. This dark tale of an evil preacher that
kills rich widows is an absolute masterpiece of the Southern Gothic
tradition.
I’m discovering, as I read, that the film adaption is one of those rare occasions where the movie is just as good as the book!”

Two young children, Pearl and John Harper, are being raised alone by their mother in Cresap’s Landing, Ohio. Their father Ben has just been executed for killing two men in the course of an armed robbery. Ben never told anyone where he hid the ten thousand dollars he stole; not his widow Willa, not his lawyer, nor his cell-mate Henry “Preacher” Powell. But Preacher, with his long history of charming his way into widows’ hearts and lives, has an inkling that Ben's money could be within his reach. As soon as he is free, Preacher makes his way up the river to visit the Harper family where—he hopes—a little child shall lead him to the fortune that he seeks.

Davis Grubb (1919–1980) was an American short-story writer and novelist. Born in Moundsville, West Virginia, he moved to New York City in 1940 to be a writer. His stories were published in magazines such as Collier’s, Cosmopolitan, and Woman’s Home Companion, and in three collections. The Night of the Hunter, the first of his ten novels, was an instant bestseller and finalist for the National Book Award. Some of his short stories were adapted for television on The Alfred Hitchcock Hour and Rod Serling’s Night Gallery; his novel Fools’ Parade was the basis for a 1971 film starring James Stewart.

“60 years after its original publication, Davis Grubb’s Night of the Hunter remains the gold standard of Southern Noir. Grubb’s unforgettably charismatic and psychopathic villain, Harry Powell, still has the power to flood your 21st century dreams with terror.” —Richard Price

“A thriller which commands one’s frozen attention. It is also a work of beauty and power and astonishing verbal magic.” —The New York Times