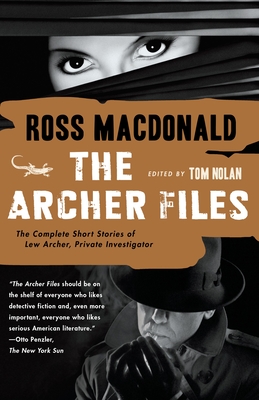 This is book number 17 in the Lew Archer Series series.

No matter what cases private eye Lew Archer takes on—a burglary, a runaway, or a disappeared person—the trail always leads to tangled family secrets and murder. Widely considered the heir to Sam Spade and Philip Marlowe, Archer dug up secrets and bodies in and around Los Angeles.

Here, The Archer Files collects all the Lew Archer short stories ever published, along with thirteen unpublished “case notes” and a fascinating biographical profile of Archer by Edgar Award finalist Tom Nolan. Ross Macdonald’s signature staccato prose is the real star throughout this collection, which is both a perfect introduction for the newcomer and a must-have for the Macdonald aficionado.

ROSS MACDONALD's real name was Kenneth Millar. Born near San Francisco in 1915 and raised in Ontario, Canada, Millar returned to the U.S. as a young man and published his first novel in 1944. He served as the president of the Mystery Writers of America and was awarded their Grand Master Award as well as the Mystery Writers of Great Britain's Gold Dagger Award. He died in 1983.

"'Archer in Memory' honors both the character and his creator... it reminds us that Macdonald's sleuth rose from troubled roots to become a good man, a saver of people no less lonely than he; and... recalls quite clearly why it is that The New York Times dubbed Ross Macdonald's stories 'the finest series of detective novels ever written by an American.'" --The Rap Sheet

"Archer fans are in for a treat.... Readers will gain a surprisingly full sense of the man from the collection.... Prose as sharp and durable as the detective's trademark charcoal-gray suits."--Booklist