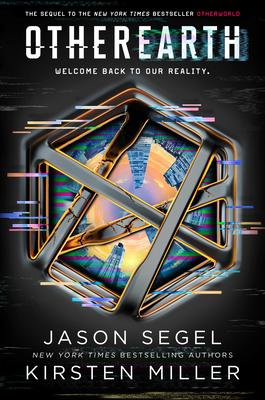 This is book number 2 in the Last Reality series.

Return to the series BuzzFeed compared to Ready Player One! The second book in the fast-paced trilogy from New York Times bestselling authors Jason Segel and Kirsten Miller is perfect for fans of HBO's Westworld.

Simon would have done anything to save his best friend after a mysterious accident almost killed her--including follow her into a virtual world. And what he and Kat discovered there was more terrifying than anything they could have ever imagined. The world's largest tech corporation, the Company, is using unwitting hospital patients to test a device that lets VR be experienced with all five senses. The technology is so advanced that it's deadly.

Now the Company is hunting Simon and Kat while war rages in Otherworld, the virtual world it created. Determined to destroy the coporation, Simon and Kat must join forces with a hacker, a gangster, and a digital entity. But as they battle to save two worlds, they uncover an all-new threat to our world: the Company's latest creation, an augmented-reality game called OtherEarth. Not only does OtherEarth kill, it has the power to erase the line between what's real and what's fantasy.

"A potent commentary on how much we're willing to give up to the lure of technology." --EW.com

"Full of high stakes, thrillers, and fantastic twists and turns, fans of Ready Player One are sure to love this addictive read." --BuzzFeed

"A fantastic journey from start to finish." --Hypable

Jason Segel is an actor and a writer. Segel wrote and starred in Forgetting Sarah Marshall and cowrote Disney's The Muppets, which won an Academy Award for Best Original Song. Segel's film credits include The End of the Tour; I Love You, Man; Jeff Who Lives at Home; Knocked Up; and The Five-Year Engagement, among others. On television, Segel starred on How I Met Your Mother, as well as Freaks and Geeks. He is the coauthor of the New York Times bestselling Nightmares! series--Nightmares!; Nightmares! The Sleepwalker Tonic; Nightmares! The Lost Lullaby; and Everything You Need to Know About Nightmares! and How to Defeat Them. OtherEarth is his second novel for young adults. To learn more about him, you can follow @jasonsegel on Twitter.

Kirsten Miller lives and writes in New York City. She is the author of the acclaimed Kiki Strike books, the New York Times bestseller The Eternal Ones, and How to Lead a Life of Crime. OtherEarth is the sixth novel Kirsten has written with Jason Segel. You can visit Kirsten at kirstenmillerbooks.com or follow @bankstirregular on Twitter.

Praise for Otherworld, Book One in the Series:

“Full of high stakes, thrillers, and fantastic twists and turns, fans of Ready Player One are sure to love this addictive read.”—Buzzfeed

“A potent commentary on how much we’re willing to give up to the lure of technology.” —EW.com

"A fantastic journey from start to finish, and will keep your attention, long after you’ve put the book down."—Hypable.com

"Authors Jason Segel and Kirsten Miller keep the action nonstop while they convincingly ratchet up the tension…[in] the high-stakes gaming and intrigue of [Otherworld.]”—Shelf Awareness