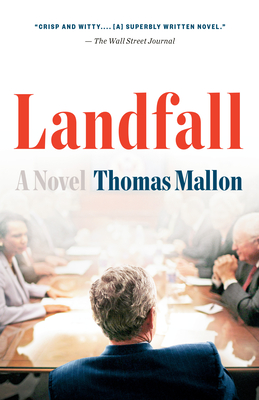 Set during the tumultuous middle of the George W. Bush years—amid the twin catastrophes of the Iraq insurgency and Hurricane Katrina—Landfall brings Thomas Mallon's cavalcade of contemporary American politics, which began with Watergate and continue with Finale, to a vivid and emotional climax.

The president at the novel's center possesses a personality whose high-speed alternations between charm and petulance, resoluteness and self-pity, continually energize and mystify the panoply of characters around him. They include his acerbic, crafty mother, former First Lady Barbara Bush; his desperately correct and eager-to-please secretary of state, Condoleezza Rice; the gnomic and manipulative Donald Rumsfeld; foreign leaders from Tony Blair to Vladimir Putin; and the caustic one-woman chorus of Ann Richards, Bush's predecessor as governor of Texas. A gallery of political and media figures, from the widowed Nancy Reagan to the philandering John Edwards to the brilliantly contrarian Christopher Hitchens, bring the novel and the era to life.

The story is deepened and driven by a love affair between two West Texans, Ross Weatherall and Allison O'Connor, whose destinies have been affixed to Bush's since they were teenagers in the 1970s. The true believer and the skeptic who end up exchanging ideological places in a romantic and political drama that unfolds in locations from New Orleans to Baghdad and during the parties, press conferences, and state funerals of Washington, D.C.

THOMAS MALLON is the author of ten novels, including Henry and Clara, Dewey Defeats Truman, Fellow Travelers, and Watergate. Fellow Travelers has been made into a contemporary opera that is regularly performed throughout the United States. Mallon is a frequent contributor to The New Yorker and The New York Times Book Review, and in 2011 he received the American Academy of Arts and Letters' Harold D. Vursell Memorial Award for prose style. He has been the literary editor of GQ and the deputy chairman of the National Endowment for the Humanities. He lives in Washington, D.C.

“Entertainingly bitchy . . . Landfall is smart and knowing and absorbing.  It is to novels as good studio movies are to movies—extremely well-made, satisfying if you have a taste for [a] genre occasionally excellent.  The prose is a pleasure . . . Landfall is fascinating.” —Kurt Anderson, The New York Times Book Review

“As in Mr. Mallon’s many other novels, the writing is crisp and witty, the central characters complex and sympathetic in surprising ways, the narrative structure tight. . . [a] superbly written novel . . . Mr. Mallon has a gift”—The Wall Street Journal

“For lovers of American politics, a new novel by Thomas Mallon is always a mouth-watering prospect . . . Many of the characters from that era will be brought to life on the page with Mallon’s trademark wit and, crucially, no little sympathy.” —The National

“[A] comic saga by a lauded writer of historical fiction. . .” —O Magazine

“Fantastic . . . Mallon provides juicy, humanized depictions of interactions between the familiar talking heads of state . . . This novel makes a fascinating flesh-and-blood spectacle out of moments now relegated to history.”—Publishers Weekly

“It’s nice that we have a writer as skilled as Thomas Mallon to imagine [this] for us . . . At its best, Mallon’s amusing new novel, Landfall, operates like the thought-bubble we’d always wanted . . . Close readers might detect the faintest echo of Robert Penn Warren’s All the King’s Men . . .” —The Washington Post

“Mallon, a veteran of political fiction, has written a blackly comic novel . . .” —The New York Times

“An edgy read. There’s a bit of a thrill there, stoked by Thomas Mallon’s sharp, often witty, writing and his confident skeptical voice. Most readers will find descriptions that will startle and delight. . . Landfall offers a lot to think about and quite a bit of fun, too.”—The Washington Times

“Mallon’s work is breathtaking in its depth and humanity. He has turned his focused microscope on recent history and unlocked the covert lives of public figures. Part love story and part tragic drama that never ceases to keep the reader interested and involved. A+” —Seattle Book Review

“A well-researched view of the jealousies and back-room dealings of early 21st-century American politics.” —BookPage

“Talented storyteller . . . [a] real pleasure . . . Mallon is a master of dialogue, spinning lines for his characters that sound exactly like what you would expect them to say, only more so . . .” —Commentary