Robert B. Parker's Blackjack (A Cole and Hitch Novel #8) (Paperback) 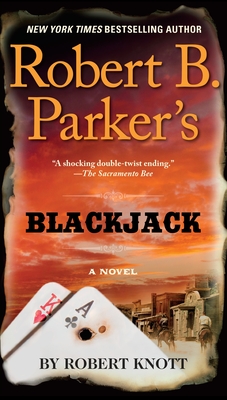 This is book number 8 in the A Cole and Hitch Novel series.

Appaloosa, the hometown of Territorial Marshals Virgil Cole and Everett Hitch, continues to prosper, but with prosperity comes a slew of new trouble: carpetbaggers, gamblers, migrants, peddlers, drifters, thieves, and whores, all boiling in a cauldron of excess and greed. And there’s a new menace in town: a wealthy, handsome easterner—and the owner of Appaloosa’s new casino—Boston Bill Black.

Boston Bill is flashy and bigger than life. He’s a prankster and a notorious womanizer, and with eight notches on the handle of his Colt, he’s rumored quick on the draw. When he finds himself wanted for a series of murders, he quickly vanishes. Cole and Hitch locate and arrest him, but Boston Bill escapes once again. Another murder sets the duo on his trail, eventually taking them back to Appaloosa—where one woman in particular may, or may not, prove to be the apple of Boston Bill’s eye.

Robert B. Parker was the author of seventy books, including the legendary Spenser detective series, the novels featuring Police Chief Jesse Stone, and the acclaimed Virgil Cole and Everett Hitch westerns, as well as the Sunny Randall novels. Winner of the Mystery Writers of America Grand Master Award and long considered the undisputed dean of American crime fiction, he died in January 2010.

“This is the most satisfying of Knott’s Cole-Hitch tales, with a shocking double-twist ending.” —The Sacramento Bee

“Westerns need atmosphere as much as story, and Knott has a knack for six-gun verisimilitude, sketching the land and summer heat, the horses and the shopkeepers. Knott’s especially good with the prototypical Old West marshal, Virgil Cole, ‘perfectly present in the here and now,’ every inch stoic lawman. . . . His tale gallops along without confusing readers new to the series . . . A darn good way to pass an afternoon.” —Kirkus Reviews

PRAISE FOR ROBERT B. PARKER'S WESTERNS

“Knott’s third shot at re-creating the Cole-Hitch partnership is by far the
best….There is also a very clever mystery mixed in, and the Seraphine subplot adds a Twilight Zone finish to an extraordinarily entertaining novel.”—Booklist

“Fans of the late Robert B. Parker’s best-selling novels about territorial marshals Virgil Cole and Everett Hitch will be delighted to discover a new adventure written by famed author Robert Knott, who also penned the earlier series entry Ironhorse. In The Bridge, the duo investigates a strange disappearance and gets some unlikely help from a fortune teller.”—Cowboys and Indians Magazine

“For fans of the late Parker, this book is a refreshing reunion with these cowboy characters who choose their words and situations most carefully…much to enjoy.”—Deseret News

“Knott has no trouble cooking up larger-than-life characters to populate the books.”
— Fort Worth Star-Telegram

“A welcome second edition to the return of these delightful western characters.”
—The Oklahoman