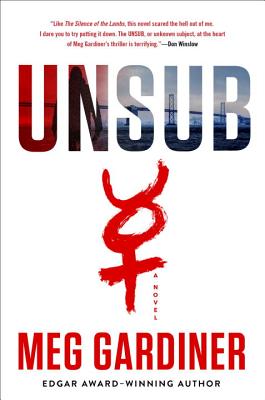 A riveting psychological thriller inspired by the never-caught Zodiac Killer, about a young detective determined to apprehend the serial murderer who destroyed her family and terrorized a city twenty years earlier.

Caitlin Hendrix has been a Narcotics detective for six months when the killer at the heart of all her childhood nightmares reemerges: the Prophet. An UNSUB—what the FBI calls an unknown subject—the Prophet terrorized the Bay Area in the 1990s and nearly destroyed her father, the lead investigator on the case.

The Prophet’s cryptic messages and mind games drove Detective Mack Hendrix to the brink of madness, and Mack’s failure to solve the series of ritualized murders—eleven seemingly unconnected victims left with the ancient sign for Mercury etched into their flesh—was the final nail in the coffin for a once promising career.

Twenty years later, two bodies are found bearing the haunting signature of the Prophet. Caitlin Hendrix has never escaped the shadow of her father’s failure to protect their city. But now the ruthless madman is killing again and has set his sights on her, threatening to undermine the fragile barrier she rigidly maintains for her own protection, between relentless pursuit and dangerous obsession.

Determined to decipher his twisted messages and stop the carnage, Caitlin ignores her father’s warnings as she draws closer to the killer with each new gruesome murder. Is it a copycat, or can this really be the same Prophet who haunted her childhood? Will Caitlin avoid repeating her father’s mistakes and redeem her family name, or will chasing the Prophet drag her and everyone she loves into the depths of the abyss?

Meg Gardiner is the author of twelve critically acclaimed novels, including China Lake, which won the Edgar Award. Originally from Santa Barbara, California, she lives in Austin, Texas.

“Gardiner's novel breathes new life into the sub-genre with her mastery of police procedure; with superb characterizations of her heroine, the heroine's father and the killer; and with enough twists and turns to leave fans of TV's 'Scandal' and 'How to Get Away With Murder' short of breath. The result is an intelligent, sharply written, compelling page-turner that is satisfying on every level.”—Associated Press

“An adrenaline-fueled rush, this series first has newly minted narcotics detective Caitlyn Hendrix reassigned to homicide so she can track down a sadistic serial killer, the Prophet...Shades of “Silence of the Lambs’’ and the Zodiac Killer.”—Boston Globe

“Gardiner has created the perfect balance of vulnerability and violence in her main characters, all of whom are damaged in their own ways. When the killer becomes a 'hot knife through the center of (Caitlin’s) head,' UNSUB will already have a cold grip on your heart.”—Milwaukee Journal-Sentinel

“Caitlyn’s desperate quest to stop the killings becomes all-consuming, and toward the end, the book is hard to put down. Fans will delight in the ending, which opens a pathway to a sequel... Thriller fans who like a strong shot of horror will be delighted by this gruesome and furiously fast-paced read.”—San Francisco Chronicle

“A really frightening book, in large part because of Gardiner’s deft use of close third-person narration… the tension in UNSUB is ratcheted way up because of our forays into the twisted mind of the Prophet…”—LitHub

“The writing is sleek and compelling and emphasizes the escalation of tension, which is a must for a story such as this.”—The Oklahoman

“Outstanding series launch...Taut pacing and sympathetic characters play against a terrifying villain, who will crawl beneath your skin and trouble your sleep. Thriller fans will eagerly await the sequel.”—Publishers Weekly (starred review)

“Ratchets up suspense to its cliff-hanging epilog that begs for a sequel. Edgar Award–winning author Gardiner, long praised for developing full-bodied characters while spinning intense psychological thrillers, does herself proud here...hope to see more of Caitlin Hendrix.”—Library Journal (starred review)

“Gardiner keeps the suspense at peak levels throughout the novel, conjuring creepy, atmospheric music in the minds of her audience, who will be anxiously perched on the edges of their seats anticipating every next horror. Those who worship at the altar of the thriller shall rejoice. The Prophet has arrived.”—Shelf Awareness

“The staccato delivery and non-stop thrills will have you holding your breath until the very end. There is not one wasted word in her delivery...And remember as you read, breathe in and don’t forget to breathe out. Repeat as necessary.”—The Florida Times-Union

“Move over, Zodiac. The latest of the countless fictional serial killers you've inspired gives you a blistering run for your money.”—Kirkus Reviews

“Based on the unsolved crimes of the real-life Zodiac Killer, this thriller is well crafted and psychologically complex, easily comparable to Jeffery Deaver’s Lincoln Rhyme series.”—Booklist

“Gardiner shines, as usual, with character development, building her grisly psychological thriller around detective Caitlin Hendrix, whose father failed to catch the killer decades earlier. Suspense fans should grab the opportunity to meet Caitlin on her first outing...”—BookPage.com

“This is one of those perfect serial killer fares that bring on the nightmares only a fantastic writer like Gardiner can create...This story is one of those ‘too good’ to review tales. Nothing can be given away when it comes to this plot. All that can be said is Meg Gardiner is an amazing writer and this is yet another book that proves that point to a ‘T.’”—Suspense Magazine

“In this satisfying psychological thriller inspired by the terrifying, never-solved, reallife ‘Zodiac’ killings, the brisk pace never lets up and the twists keep coming to the very last line...Meg Gardiner’s crisp prose and sharply drawn, believable characters maintain the reader’s interest from the first page to the last.”—Mystery Scene Magazine

“UNSUB, the new serial killer novel by Meg Gardiner, will surely delight the fans of fast-paced thrillers. Gardiner’s plots are always nail-biting and her twists are more like cliffs that she takes you to the edge of and then at the last moment pulls you back...a perfect summer read.”—Mystery Tribune

“Meg Gardiner has brought a new dimension to the sub-genre of serial killer novels. Her killer is a monster, but he is a monster that is more realistic than most fictional serial killers, thus making him more frightening...Gardiner has created a female detective who is empathetic, tough but not hard...no fan of psychological thrillers should miss Unsub.”—New York Journal of Books

“With a killer from your nightmares and a heroine who must risk everything to stop him, UNSUB grabs you by the heart and refuses to let go. A relentless, compelling thriller.”—Lisa Scottoline, New York Times bestselling author of One Perfect Lie

“‘Sleep Destroyer’ Meg Gardiner is up to her evil tricks again with UNSUB, a bracingly fresh serial-killer novel that hums like the third rail. It has all her trademarks—a complex, compelling heroine, a jet-fueled story, and elegant, crisp prose. I blasted through it in a single sitting last night and remain conscious today only due to espresso and the half-life buzz of reading adrenaline. An entrancing and stunning thriller!”—Gregg Hurwitz, New York Times bestselling author of The Nowhere Man

“Like The Silence of the Lambs, this novel scared the hell out of me. I dare you to try putting it down. The UNSUB, or unknown subject, at the heart of Meg Gardiner’s thriller is terrifying.”—Don Winslow, New York Times bestselling author of The Cartel

“UNSUB is a mesmerizing, unforgettable, nonstop thriller that never lets you go. The single most terrifying book of the past decade.”—Steve Hamilton, New York Times bestselling author of Exit Strategy