Closer Than You Know: A Novel (Paperback) 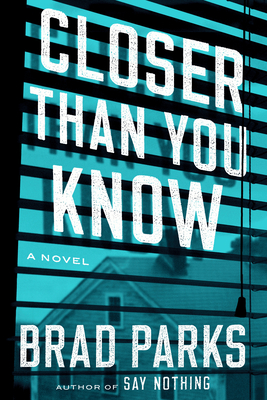 A riveting, emotionally powerful stand-alone domestic suspense thriller perfect for fans of The Couple Next Door and What She Knew.

Disaster, Melanie Barrick was once told, is always closer than you know.

It was a lesson she learned the hard way growing up in the constant upheaval of foster care. But now that she's survived into adulthood--with a loving husband, a steady job, and a beautiful baby boy named Alex--she thought that turmoil was behind her.

Until one Tuesday evening when she goes to pick up Alex from childcare only to discover he's been removed by Social Services. And no one will say why. It's a terrifying scenario for any parent, but doubly so for Melanie, who knows the unintended horrors of what everyone coldly calls "the system."

Her nightmare mushrooms when she arrives home to learn her house has been raided by sheriff's deputies, who have found enough cocaine to send Melanie to prison for years. The evidence against her is overwhelming, and if Melanie can't prove her innocence, she'll lose Alex forever.

Meanwhile, assistant commonwealth's attorney Amy Kaye--who has been assigned Melanie's case--has her own troubles. She's been dogged by a cold case no one wants her to pursue: a serial rapist who has avoided detection by wearing a mask and whispering his commands. Over the years, he has victimized dozens of women.

Including Melanie. Yet now her attacker might be the key to her salvation . . . or her undoing.

Brad Parks is the only author to have won the Shamus, Nero, and Lefty Awards, three of crime fiction’s most prestigious prizes. A former reporter with The Washington Post and The Star-Ledger (Newark), he lives in Virginia with his wife and two children. His previous novel, Say Nothing, was named both a Library Journal and a Kirkus Best Book of 2017.

“Another winning tale of domestic suspense from the Shamus- and Nero Award–winning author Parks, who knows how to get readers to empathize emotionally with his characters while amping up the tension and suspense from the first page.”—Library Journal (starred review)

"Closer Than You Know grabs you by the gut in Chapter One and keeps upping the tension through every shocking plot twist. Don’t expect to come up for air until the final, satisfying pages.”—Alafair Burke, New York Times bestselling author of The Wife

“Strong plotting, memorable characters, and situations that will hit readers where they live make Closer Than You Know a compulsive read.”—Linwood Barclay

“Rolling out a finely constructed story filled with tension and suspense is Parks' stock in trade, further underscored in his newest edge-of-your-seat domestic thriller.”—Inside Jersey

“A diverting, exciting read, with an ending you won’t see coming.”—Booklist

“A mystery is supposed to be a surprise but this one floored me. Parks has been a consistently solid writer but with this book, he entered a new level with even fuller characters and superb plotting. Parks plumbs parents' anguish when their children are kidnapped.”—NJ.com

“From the author of the incredible Say Nothing, this new title is so riveting that it pulls you even deeper into the thrilling imagination and amazing writing of the talented Brad Parks...a tale that at times makes the blood run cold. Brad Parks is a master at creating frightening, emotionally-overcharged stories that take your breath away.”—Suspense Magazine

“[A] real gem...  Closer Than You Know [is] full of what makes a great novel great. Brilliant characters, as well as a plot line that will rattle your nerves with every page.”—Fredricksburg Free Lance-Star

“[Closer Than You Know] beautifully levels the tension higher towards its climax and will keep readers on the edge of their seats trying to find out whodunit and devouring every word.”—Bookreporter.com

Praise for Brad Parks and Say Nothing

“Parks does a fantastic job conveying every parent’s worst fear while also showcasing the marital conflict and mistrust that erupts in the midst of a crisis. The complications and twists build to an unexpected climax that is both perfect and gut-wrenching...Fans of Harlan Coben and Lisa Gardner will love this thriller. Don’t stay silent, tell everyone.”—Library Journal, Starred Review

“The novel’s final pages are exciting, surprising and deeply moving. How moving? Its ending brought me to tears, and, where books are concerned, such moments are rare… [Say Nothing] carries his work to a new level.”—The Washington Post

“Parks dispenses plot twists with a poisoned eyedropper...The nerve-shredding never lets up for a minute as Parks picks you up by the scruff of the neck, shakes you vigorously, and repeats over and over again till a climax so harrowing that you'll be shaking with gratitude that it's finally over.”—Kirkus Reviews, Starred Review

“[Say Nothing] grips the reader from the get-go and doesn’t let up until the final twist in a story that’s filled with surprises.”—Associated Press

“[Say Nothing] begins by shocking the mind and ends by shattering the heart. The work of an author who continues to raise his sights and refine his immense talent...readers will quickly say ‘yes’ to this spellbinding, disturbing novel.”—The Richmond Times-Dispatch

“Brad Parks latest, Say Nothing, says it all—perfectly. Some books, especially stories about children acting nobly, make me mist up. But real tears, enough to require dabbing eyes? That does not happen. Yet as I finished the former Star-Ledger reporter’s latest book, I was crying... [Say Nothing] takes Parks to a new level.”—The Star-Ledger

“With the tension ratcheted up to 10, you’ll churn through pages like your life depends on it. Filled with more twists and turns than a country back road, you will never see what lies ahead in Say Nothing. After reading Say Nothing, I only had one thought in my head: I have to read everything Parks has written. After this book, I’m going to be a fan for life.”—Fredericksburg Free Lance-Star

“Parks’ legal thriller gets off to a roaring start, plunking us immediately in the middle of things.”—Booklist

“Terrific book. Truly terrific. Tension throughout and tears at the end. What could be better than that?”—Sue Grafton

“Say Nothing moves Brad Parks onto the top shelf of thriller writers.  He grabs readers' hearts in the first chapter, and doesn't let go until the last line.”—Joseph Finder

“A pedal-to-the floor thriller! Say Nothing grabs you from the first few paragraphs and never lets go. Writing in sharp, no-nonsense prose, Parks perfectly nails the dynamics of a family under the gun and has conjured a plot (did I mention high-speed?) that leaps straight from today’s headlines. This novel’s a winner!”—Jeffery Deaver

“Grips you in a vice from the very beginning, and shreds your emotions. Terrific, powerful storytelling at its very best. A tour de force.”—Peter James