Through Two Doors at Once: The Elegant Experiment That Captures the Enigma of Our Quantum Reality (Hardcover) 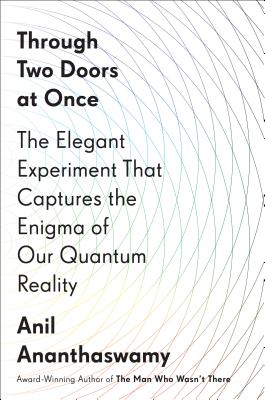 By Anil Ananthaswamy
$27.00
Not available to order.

The intellectual adventure story of the "double-slit" experiment, showing how a sunbeam split into two paths first challenged our understanding of light and then the nature of reality itself--and continues to almost 200 years later.

Many of science's greatest minds have grappled with the simple yet elusive "double-slit" experiment. Thomas Young devised it in the early 1800s to show that light behaves like a wave, and in doing so opposed Isaac Newton. Nearly a century later, Albert Einstein showed that light comes in quanta, or particles, and the experiment became key to a fierce debate between Einstein and Niels Bohr over the nature of reality. Richard Feynman held that the double slit embodies the central mystery of the quantum world. Decade after decade, hypothesis after hypothesis, scientists have returned to this ingenious experiment to help them answer deeper and deeper questions about the fabric of the universe.

How can a single particle behave both like a particle and a wave? Does a particle exist before we look at it, or does the very act of looking create reality? Are there hidden aspects to reality missing from the orthodox view of quantum physics? Is there a place where the quantum world ends and the familiar classical world of our daily lives begins, and if so, can we find it? And if there's no such place, then does the universe split into two each time a particle goes through the double slit?

With his extraordinarily gifted eloquence, Anil Ananthaswamy travels around the world and through history, down to the smallest scales of physical reality we have yet fathomed. Through Two Doors at Once is the most fantastic voyage you can take.

Anil Ananthaswamy is an award-winning journalist and former staff writer and deputy news editor for the London-based New Scientist magazine. He has been a guest editor for the science writing program at the University of California, Santa Cruz, and organizes and teaches an annual science journalism workshop at the National Centre for Biological Sciences in Bengaluru, India. He is a freelance feature editor for the Proceedings of the National Academy of Science's Front Matter. He contributes regularly to the New Scientist, and has also written for Nature, National Geographic News, Discover, Nautilus, Matter, The Wall Street Journal and the UK's Literary Review. His first book, The Edge of Physics, was voted book of the year in 2010 by Physics World, and his second book, The Man Who Wasn't There, won a Nautilus Book Award in 2015 and was long-listed for the 2016 Pen/E. O. Wilson Literary Science Writing Award.

Praise for Through Two Doors at Once

“Through Two Doors at Once is a challenging and rewarding survey of how scientists…are grappling with nature’s deepest, strangest secrets.”
--Wall Street Journal

“A fascinating tour through the cutting-edge physics the experiment keeps on spawning.”
--Scientific American

"“In this book, science writer Anil Ananthaswamy gives an absolutely mind-boggling tour of how quantum physicists try to explain this “reality” that one of the most powerful scientific models of our era.”
--Smithsonian

"Through Two Doors at Once offers beginners the tools they need to seriously engage with the philosophical questions that likely drew them to quantum mechanics."
--Science

“At a time when popular physics writing so valorizes theory, a quietly welcome strength of Ananthaswamy’s book is how much human construction comes into focus here. This is not “nature” showing us, but us pressing “nature” for answers to our increasingly obsessional questions.”
--Margaret Wertheim, The Washington Post

"Ananthaswamy's book is simply an outstanding exploration of the double slit experiment and what makes it so weird."
--Forbes

"A thrilling survey of the most famous, enduring, and enigmatic experiment in the history of science."
--Kirkus, starred review

"Ananthaswamy deftly describes the science and history of a simple experiment that perplexes physicists to this day."
--Symmetry, Physics Books of 2018

"An excellent and comprehensive exploration of notable double-slit-like experiments.... A fascinating and readable exploration of quantum mechanics that is a particularly wonderful book for nonspecialists, hobbyists and students of science -- you may not be able to put this captivating book down until you’ve finished it."
--Forbes

“An engaging and accessible history of a fascinating and baffling experiment that remains inconclusive to this day. Recommended for those interested in the subject or anyone wishing to delve further into the double-slit experiment.”
--Library Journal

“Through Two Doors at Once is a fascinating read and a must for anyone who would like to find out the latest experimental advances made in this most fundamental of quantum experiments.”
--Physics World

“Ananthaswamy cleverly comes at quantum physics from a different direction…An excellent addition to the 'Quantum physics for the rest of us' shelf.”
--Brian Clegg, author of Are Numbers Real? and The Quantum Age

“Wondrous book.  If I were boarding the Trans-Siberian Railway in Moscow, Anil Ananthaswamy is the companion I’d want in the Lounge car.  I would buy him a very good Scotch, say ‘Tell me about quantum physics and the scientists who created it,’ and then I’d sit back contentedly for the seven days to Vladivostok, and listen."
--David Quammen, award-winning author of The Song of the Dodo and (forthcoming) The Tangled Tree

"Upon opening his two quantum doors, Anil Ananthaswamy invites us into the bizarre and wacky world of nature on the smallest of scales.  An engaging raconteur, he tells us a story that is confounding, disturbing, and yet eminently fascinating.  Ananthaswamy serves as the perfect tour guide to physics' wild side by closely examining one of its most famous experiments."
--Marcia Bartusiak, award-winning author of Einstein's Unfinished Symphony and Dispatches from Planet 3

"Quantum mechanics asks us to believe a number of bizarre things about the nature of reality. But these demands don't arise out of thin air; they are forced on us by experiments. Anil Ananthaswamy has provided a lively introduction to the most paradigmatic of these: the (in)famous double-slit experiment."
--Sean Carroll, author of The Big Picture

“The double-slit experiment is among the most important experiments ever conducted, both scientifically and historically. In this brisk and enjoyable book, Anil Ananthaswamy gives the double-slit the biography it has long deserved. Anyone interested in the true nature of our quantum world should read this book.”
--Adam Becker, Ph.D., author of What Is Real?

“All the strangeness of the quantum world is revealed as Ananthaswamy skillfully weaves an almost magical tale out of who, what, when, where and the elusive why surrounding modern versions of an experiment first performed over two hundred years ago. A must read for all those interested in the nature of reality.”
--Manjit Kumar, author of Quantum

"Like quantum particles encountering the fabled double slit, physicists have traveled many different paths in trying to parse the beguiling implications of quantum theory. Through Two Doors at Once is a marvelous guide to the leading ideas – and the stakes – in that century-long quest."
--David Kaiser, author of How the Hippies Saved Physics

"The first time I saw the double-slit experiment, I thought it was a trick. Even now that I know it's real, it still seems like magic. In his new book, Anil Ananthaswamy brings alive the magic of quantum mechanics."
--Sabine Hossenfelder, physicist and author of Lost in Math

"For a lover of physics and mathematics, there could not have been a better book to explain the complexities of quantum mechanics."
--The Hindustan Times