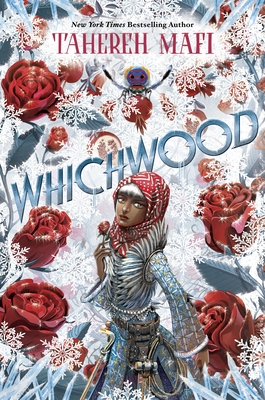 Embark on a wondrous journey through the land of Whichwood in this stunning companion to Tahereh Mafi’s acclaimed bestseller Furthermore.

A Kirkus Best Book of the Year!

Our story begins on a frosty night . . .
Laylee can barely remember the happier times before her beloved mother died. Before her father, driven by grief, lost his wits (and his way) and she was left as the sole remaining mordeshoor in the village of Whichwood, destined to spend her days scrubbing the skins and souls of the dead in preparation for the afterlife. It’s become easy to forget and easier still to ignore not only her ever-increasing loneliness, but the way her overworked hands are stiffening and turning silver, just like her hair.

But soon, a pair of familiar strangers appear, and Laylee’s world is turned upside down as she rediscovers color, magic, and the healing power of friendship.

★ "Whichwood, Tahereh Mafi's companion novel to Furthermore, is as absorbing as (if not more than) its predecessor.... Mafi's language choices create visually arresting moments.... Deftly explores several appealing themes, including the healing power of friendship and the resilience to overcome adversity in her whimsical, Persian-inspired fantasy world." −Shelf Awareness, starred review

Tahereh Mafi is the New York Times and USA Today bestselling author of the Shatter Me series and Furthermore. She can usually be found over-caffeinated and stuck in a book. You can find her online just about anywhere at @TaherehMafi or on her website, www.taherehbooks.com.

“This is a gorgeously told tale, thick with magic both beautiful and deadly, set in a world where colors can save a life, whales serve as transportation, and hordes of insects and walking corpses are the good guys, bringing as much hope as they do terror.” —Bulletin of the Center for Children's Books

“Brimming with color and magic… [Mafi’s] prose is as fresh and fragrant as the flowers her characters eat, the descriptions so vibrant that at times one can practically smell the words on the page." —New York Times Book Review
★ “A fast-paced, funny, and richly imaginative story that embraces and celebrates individuality.” —Publishers Weekly, starred review
★ “Rich, luscious, clever prose.” —Kirkus, starred review