The Art of Comedy Writing (Hardcover) 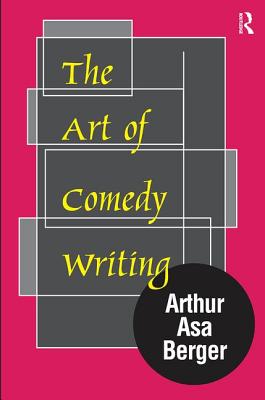 Just as a distinctive literary voice or style is marked by the ease with which it can be parodied, so too can specific aspects of humor be unique. Playwrights, television writers, novelists, cartoonists, and film scriptwriters use many special technical devices to create humor. Just as dramatic writers and novelists use specific devices to craft their work, creators of humorous materials from the ancient Greeks to today's stand-up comics have continued to use certain techniques in order to generate humor.

In The Art of Comedy Writing, Arthur Asa Berger argues that there are a relatively limited number of techniques forty-five in all that humorists employ. Elaborating upon his prior, in-depth study of humor, An Anatomy of Humor, in which Berger provides a content analysis of humor in all forms joke books, plays, comic books, novels, short stories, comic verse, and essaysThe Art of Comedy Writing goes further. Berger groups each technique into four basic categories: humor involving identity such as burlesque, caricature, mimicry, and stereotype; humor involving logic such as analogy, comparison, and reversal; humor involving language such as puns, wordplay, sarcasm, and satire; and finally, chase, slapstick, and speed, or humor involving action.

Berger claims that if you want to know how writers or comedians create humor study and analysis of their humorous works can be immensely insightful. This book is a unique analytical offering for those interested in humor. It provides writers and critics with a sizable repertoire of techniques for use in their own future comic creations. As such, this book will be of interest to people inspired by humor and the creative process professionals in the comedy field and students of creative writing, comedy, literary humor, communications, broadcast/media, and the humanities.