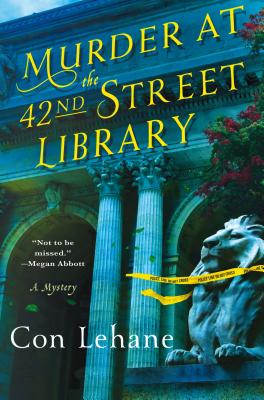 This is book number 1 in the The 42nd Street Library Mysteries series.

Murder at the 42nd Street Library follows Ambler and his partners in crime-solving as they track down a killer, shining a light on the dark deeds and secret relationships that are hidden deep inside the famous flagship building at the corner of 42nd Street and Fifth Avenue.

In their search for the reasons behind the murder, Ambler and his crew uncover sinister, and profoundly disturbing, relationships among the scholars studying in the iconic library. Included among the players are a celebrated mystery writer who has donated his papers to the library’s crime fiction collection; that writer’s long-missing daughter, a prominent New York society woman with a hidden past, and more than one of Ambler’s colleagues at the library. Shocking revelations lead inexorably to the traumatic events that follow—the reading room will never be the same.

"Lehane (Death at the Old Hotel, 2007, etc.) awards his previous detective, bartender Brian McNulty, a cameo but focuses on the complicated Ray, who looks like a promising newcomer in the talented-amateur ranks." —Kirkus (starred)

“Lehane, better known for his "Bartender Brian McNulty" series (Death at the Old Hotel), brings McNulty along for the ride (as a minor character) in this library-set series launch. His protagonist, named after two masters of the genre (Raymond Chandler and Eric Ambler), reflects the author's in-depth knowledge of the history of the genre.A fun read for mystery buffs and librarians alike.” —Library Journal

"Ray makes a sturdy, believable hero for this new series. Murder at the 42nd Street Library will make readers want to schedule a visit to this archetypal library during their next visit to New York City."—Sun Sentinel

"This provocative story features a cast of characters that are well fleshed out, completely fallible and very human. And Lehane sure can write a villain—there are plenty of people you can love to hate in this book, from the arrogant researcher and his cheating wife to the abusive caretaker of the fragile woman down the street. Ambler himself is a shrewd character who immediately brings to mind the phrase 'still waters run deep.' Murder at the 42nd Street Library is altogether an intriguing tale of jealousy and revenge, peppered with colorful characters and a shocking conclusion." —Crimespree

“Con Lehane's Murder at the 42nd Street Library offers up a masterful tale of intrigue, jealousy, and revenge in the grand tradition of Ross Macdonald. Not to be missed.” —Megan Abbott

“An inventive tale of murder and mayhem. Con Lehane, like his librarian-sleuth Ray Ambler, knows how to keep his readers happy.” —Daniel Stashower, Edgar-winning author of The Hour of Peril