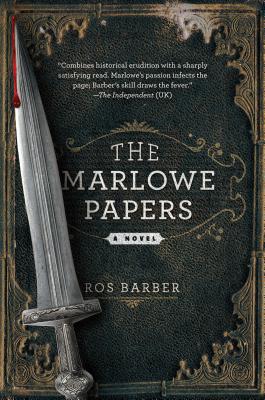 "You're the author of the greatest plays of all time."
"But nobody knows."
"""And if it gets out, you're dead."

On May 30, 1593, a celebrated young playwright was killed in a tavern brawl in London. That, at least, was the official version. Now Christopher Marlowe reveals the truth: that his "death" was an elaborate ruse to avoid a conviction of heresy; that he was spirited across the English Channel to live on in lonely exile; that he continued to write plays and poetry, hiding behind the name of a colorless man from Stratford one William Shakespeare.

With the grip of a thriller and the emotional force of a sonnet, this remarkable novel in verse gives voice to a man who was brilliant, passionate, and mercurial. A cobbler's son who counted nobles among his friends, a spy in the Queen's service, a fickle lover and a declared religious skeptic, Christopher Marlowe always courted trouble. In this memoir, love letter, confession, and settling of accounts, Ros Barber brings Christopher Marlowe and his era to vivid life in "The Marlowe Papers.

ROS BARBER was born in Washington, DC and raised in England. She is the author of three poetry collections and her poetry has appeared in "Poetry Review, London Magazine, The Guardian "among many other publications. Ros has a PhD in Marlowe studies and has taught writing at The University of Sussex for more than a decade. In 2011, she was awarded the prestigious Hoffman Prize for "The Marlowe Papers. "She lives in Brighton, England.

“A remarkable book. It is also a brave one…Barber conjures up some beautifully realized scenes.”
--New York Times Book Review

"With the screw-tightening verve of a great thriller and the romantic pull of Renaissance poetry, the novel — which purports that Marlowe is the true author of William Shakespeare’s legendary oeuvre — is a gripping, lyrical, most unlikely page-turner.” --American Way

“Lush, inspired and provocative, this spellbinding dossier conjures up a bewitching Marlowe.” --Kirkus

"A must-read for anyone interested in Marlowe, William Shakespeare or 16th-century English history . . . The writing is superb, the plot moves quickly and Marlowe's story is compelling. An award-winning, highly original novel in verse about the life of Christopher Marlowe--even after the world believed him dead.”--Shelf Awareness

"Terrifically accomplished and enjoyable . . . restores one's faith in English fiction." --Fay Weldon "Searing poetry meets compelling narrative in a historical tour de force that had me ripping through the pages. My only complaint is that everything else I read for a while now will, I fear, suffer by comparison." --Robyn Young, author of The Fall of the Templars and Brethren

"For me personally, this is the most complete Marlowe I've ever encountered." - Will Self, author of Umbrella  "A story of ambition, infamy, beer, cunning, facepaint, red herrings, knives, and pen and paper, [The Marlowe Papers] is not only an homage to Marlowe but a celebration of poetry - and of its power to allow the dead to speak." --Blake Morrison, author of And When Did You Last See Your Father? “The best book I've read for a long time. Truly innovative, truly original, and a powerful poetic journey to another truth.  Ros Barber has told a great story, in a fascinating way, so fascinating that she had someone like me gripped to the very end. This really is a joy to read and a true work of art.”--Benjamin Zephaniah, author of Gangsta Boy and Face
“The Marlowe Papers is a bravura performance: a noir thriller in doublet and hose. The life of Kit Marlowe, the baddest boy of English Literature, is great fare for any writer. There’s espionage and sex; murder and treachery; and, this being England, a healthy dose of cross-dressing. And Barber serves it, steaming hot.” --Simon Worrall, author of The Poet and The Murderer

“The Marlowe Papers is the best read, so far, this year.” –The Sunday Express (UK)