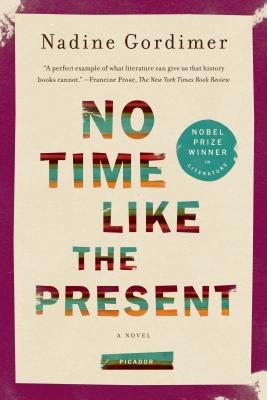 "A perfect example of what literature can give us that history books cannot."—Francine Prose, The New York Times Book Review

Steve and Jabulile, once clandestine lovers under a racist law forbidding sexual relations between black and white, are living in a newly free South Africa. Both were combatants in the struggle against apartheid, and now, he, a university lecturer, and she, a lawyer, are parents of children born in freedom. But as the ideals of this "better life for all" are challenged by the realities of the world around them, Steve and Jabulile consider leaving the country they so vehemently fought to free.

The subject in No Time Like the Present is contemporary, but Nadine Gordimer's treatment is, as ever, timeless. In the telling of this conflicted couple, she captures the fragmented essence of a nation.

Ms. Gordimer was a vice president of PEN International and an executive member of the Congress of South African Writers. She was a fellow of the Royal Society of Literature in Great Britain and an honorary member of both the American Academy of Arts and Letters and the American Academy of Arts and Sciences. She was also a Commandeur de'Ordre des Arts et des Lettres (France). She held fourteen honorary degrees from universities including Harvard, Yale, Smith College, the New School for Social Research, City College of New York, the University of Leuven in Belgium, Oxford University, and Cambridge University.

Ms. Gordimer won numerous literary awards, including the Booker Prize for The Conservationist, both internationally and in South Africa.

“No Time Like the Present is Gordimer's best novel since her first, The Lying Days.” —Susan Salter Reynolds, Newsday

“To read No Time Like the Present is to plunge into the cauldron that is South Africa today.... Although she is eighty-eight, Gordimer has all the enthusiasm of youth as she celebrates what she sees all around her. Her approach is kaleidoscopic.” —Los Angeles Times

“Gordimer sees history, power, and a gnawing desire for something secular yet entwined in every mundane gesture. The personal remains political even when the great political fight has been won.” —Maureen Corrigan, NPR

“Every once in a while, you begin to read a book and suddenly realize you are experiencing greatness. This is such a book….There are few, if any, writers today who can match Nadine Gordimer….May she never stop.” —The Washington Times