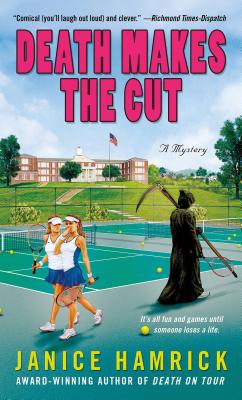 By Janice Hamrick
$7.99
On Our Shelves Now

This is book number 2 in the A Jocelyn Shore Mystery series.

The first bell of the new school year hasn't even rung and Jocelyn Shore is already at the scene of a murder. Her friend and colleague Fred Argus has been found dead—and the evidence suggests he was selling drugs to his students. Shocked by the insinuation, Jocelyn takes it upon herself to lead an on-campus investigation, asking questions guaranteed to set fellow teachers, administrators, and parents on edge.

Jocelyn's case couldn't have come at a worse time: The school happens to be serving as the back-drop for a blockbuster film. But not even one of Hollywood's most notable directors can stop Jocelyn from clearing Fred's name. The truth becomes stranger than fiction, however, when Jocelyn is attacked on set. Soon she finds herself in the path of a killer determined to put a stop to her sleuthing—and do whatever it takes to keep the secrets surrounding Fred's death on the cutting-room floor….

Janice Hamrick is the author of the Jocelyn Shore mystery series. The first, Death on Tour, was the winner of the Minotaur Books/Mystery Writers of America First Crime Novel Competition, a finalist for the Mary Higgins Clark Award, and a nominee for the Romantic Times Reviewers’ Choice Awards Best First Mystery. She lives in Austin, Texas.

“Death on Tour is fun, romantic, and delightful, and full of fascinating bits about ancient Egypt.” —Cleveland Plain Dealer on Death on Tour

“Hamrick does a good job capturing life on an exhausting budget tour as her snazzy if snarky amateur sleuth… investigates some fishy fellow tourists.” —Publishers Weekly on Death on Tour

“The cozy mystery was once limited to adorable English villages and the like, but it long ago outgrew its traditional boundaries. Janice Hamrick's Death on Tour is a charming example.” —The Seattle Times on Death on Tour

“A classy whodunit, Death on Tour also offers a trove of Egyptology and a wealth of humor —Christie’s characters were never this smart-alecky. Hamrick plays fair with clues, and the alert reader has a fighting chance of identifying the culprit from among the cast of suspects.” —Richmond Times Dispatch on Death on Tour

“Janice Hamrick's debut mystery is highly recommended for those who love a charming, suspenseful, hilarious cozy with a happy, fairytale ending. (It's the perfect cozy for taking on vacation.)” —Gumshoe Review on Death on Tour