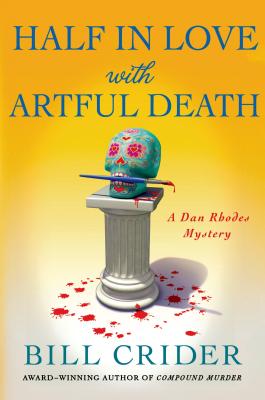 By Bill Crider
Unavailable. Orders will be auto-cancelled.

This is book number 21 in the Sheriff Dan Rhodes Mysteries series.

The local community college and an antique dealer team up to have a workshop for artists. One local man, Burt Collins, isn't fond of the art, and he isn't fond of having the artists in town. Sheriff Dan Rhodes is called to the antique store because Collins has been accused of vandalizing some paintings. When Rhodes arrives, two men are restraining Collins. But before Rhodes can take Collins into custody, a near riot breaks out. Rhodes gets the situation under control with the help of college math instructor and wannabe cop Seepy Benton.

Later that day Rhodes has to help the county animal control officer round up some runaway donkeys, and that evening there's a robbery at a local convenience store. After looking into the robbery, Rhodes goes by to see Collins and talk to him about the vandalism. Collins isn't talking because he's been killed, his head bashed in with a bust of Dale Earnhardt, Jr.

Rhodes is faced with other problems, too: a naked woman in a roadside park and a gang of meth-cookers. It seems as if a Sheriff's work is never done.

Half in Love with Artful Death is the 21st book in this entertaining and original series. It's the perfect time for mystery fans to discover this Texan star of the genre, Bill Crider.

“Sheriff Dan Rhodes continues to maintain law, if not order, in Crider's amiable 21st mystery set in Clearview, Tex….Since Rhodes doesn't have the crime fighting weapons shown on TV, he must get things done the old-fashioned way in this amusing tale.” —Publishers Weekly

“This is Bill Crider's 21st book in his Dan Rhodes series and Rhodes remains the most unorthodox sheriff in all of Texas. He still refuses to wear John Wayne hats; he thinks they look silly. The same goes for cowboy boots. Rhodes is affable, nervy and the sharpest crime solver for miles around.” —The Toronto Star

“It is easy to see why Crider has had a following through twenty prior Dan Rhodes mysteries. The characters could easily become beloved friends in the vein of Stephanie Plum's sidekicks or Kinsey Millhone's neighborhood buddies, especially to the lover of cozies….There's no need to go back to the beginning to start reading the series – just jump in anywhere. Half in Love with Artful Death would be a fine place to start this summer, maybe while on a plane ride or in a beach chair.” —The Writers' League of Texas

“While the crimes may be serious, watching how Rhodes deals with them is pretty entertaining… a good book for those who like their mysteries relaxing and aren't looking for action-driven drama. The sheriff always gets his man in the end--he just takes a little more time to get there.” —Mystery Scene Magazine