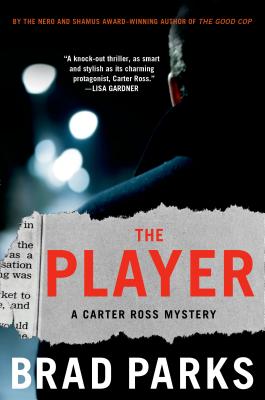 By Brad Parks
$25.99
Backordered. Place an order and we will let you know when to expect your book.

This is book number 5 in the Carter Ross Mysteries series.

When he hears residents of a Newark neighborhood are getting sick—and even dying—from a strange disease, investigative reporter Carter Ross dives into the story—so deep he comes down with the illness himself. With even more motivation to track down the source of the disease, Carter soon hits upon a nearby construction site. But when the project's developer is found dead, and his mob ties surface, Carter knows he's looking at a story much bigger—and with even more dangerous consequences—than an environmental hazard.

Back in the newsroom, Carter has his hands full with his current girlfriend and with the paper's newest eager intern, not to mention his boss and former girlfriend Tina Thompson, who has some news for Carter that's about to make tangling with the mob seem simple by comparison, in The Player by Brad Parks.

“A highly entertaining tale and one of the best portraits of a working reporter since Michael Connelly's The Poet.” —The Washington Post

“What makes Parks such a fantastic storyteller is his main cast of characters, all of whom feel real. Parks has quietly entered the top echelon of the mystery field.” —RT Book Reviews (Top Pick! 4 ½ stars)

“Expect a complicated, thrilling ending with a splash of mayhem. Parks, a gifted storyteller (with shades of Mark Twain or maybe Dave Barry), shows his mastery of the comic absurd behind serious journalism.” —Library Journal (starred review)

“Muckraking has rarely been so meaty or so funny.” —Kirkus (starred review)