The Spanish Armada: A History (Hardcover) 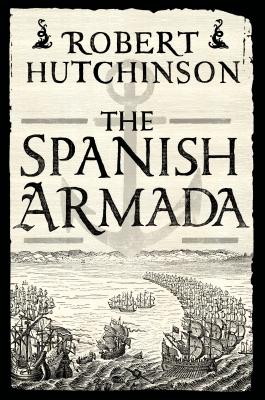 By Robert Hutchinson
$32.99
Email or call for price.

After the accession of Elizabeth I in 1558, Protestant England was beset by the hostile Catholic powers of Europe, including Spain. In October 1585, King Philip II of Spain declared his intention to destroy Protestant England and began preparing invasion plans, leading to an intense intelligence war between the two countries and culminating in the dramatic sea battles of 1588.

Popular history dictates that the defeat of the Spanish Armada was a David versus Goliath victory, snatched by plucky and outnumbered English forces. In this tightly written and fascinating new history, Robert Hutchinson explodes this myth, revealing the true destroyers of the Spanish Armada—inclement weather and bad luck. Of the 125 Spanish ships that set sail against England, only 60 limped home, the rest wrecked or sank with barely a shot fired from their main armament.

In this dramatic hour-by-hour, blow-by-blow account of the Spanish Armada's attempt to destroy Elizabeth's England, Hutchinson spins a compelling and unbelievable narrative. Using everything from contemporary eyewitness accounts to papers held by the national archives in Spain and the United Kingdom, Robert Hutchinson re-creates one of history's most famous episodes in an entirely new way.

ROBERT HUTCHINSON is a historian, archaeologist, and broadcast journalist, most recently chairing the media division of Britain’s Defence, Press and Broadcasting Advisory Committee. Hutchinson has written several books on the history of the Tudors, including Last Days of Henry VIII, Elizabeth’s Spymaster, and Thomas Cromwell: The Rise and Fall of Henry VIII’s Most Notorious Minister, as well as contributing to The History Channel’s Inside the Body of Henry VIII. He lives in England.

“Contemporary readers will certainly enjoy this outstanding contribution… Tudor historian Hutchinson (Young Henry: The Rise of Henry VIII, 2012, etc.) excels in his descriptions of the flow of information…Readers know how the battle turned out, but they will relish Hutchinson's intensely detailed account… Those with fond memories of Garrett Mattingly's classic The Armada (1959) will discover an equally enthralling successor.” —Kirkus Reviews (starred review)

“In this engaging volume, archeologist and historian Hutchinson (Young Henry) sets out to overturn one of the cherished legends taught in British primary schools…Hutchinson lays out ample evidence that the Spanish ships sank more from happenstance than heroism. ” —Publishers Weekly

“[Hutchinson's] attention to battle at sea, sixteenth-century style, induces wonder at how Phillip and his high command thought they could succeed…Culminating with the Armada's ghastly shipwrecks in Ireland, Hutchinson's day-by-day story of the Armada is a fine production for maritime history buffs.” —Booklist

“The author does a magnificent job of describing the military campaign. . . . He also argues convincingly that, in terms of intelligence . . . this was a truly modern war.” —Good Book Guide (UK)

“The victory of the English navy over the Spanish Armada in 1588 is one of those defining moments . . . of British pluck and determination. . . . Well no, not really, says historian Robert Hutchinson in his revelatory new book.” —Choice (UK)

“In a book which successfully weaves together the different elements of the dramatic story, Robert Hutchinson, making use of fresh research (not least his own), sets out to consider the background and the events themselves.” —The Tablet (UK)

“Anyone who sees history as boring should be given Robert Hutchinson's book posthaste. Without sacrificing facts and research, he has the ability to construct an absolutely compelling narrative. . . . He is one of the few authors who keep you up till 3 a.m.” —The Bookseller on Young Henry

“Hutchinson is admirable at pulling out amusing tidbits from the primary sources he obviously plumbed to write this breezy account. . . . often enlivened by Hutchinson's irreverent commentary.” —Publishers Weekly on Young Henry

“Anyone with a passing interest in Tudor history will catch up quickly and delight in a detailed profile of one of England's most famous--and infamous--monarchs.” —Shelf Awareness on Young Henry